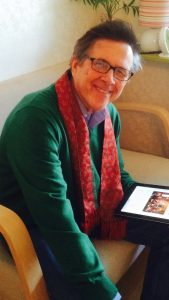 Tell us about yourself and how many books you have written.
That is such a funny question! I have devoted my entire life to legal education (as a professor, and as a former Dean of a Chicago law school), and have written likely hundreds of federal and state-specific legal treatises (with annual updates) on the subject of the Law of Evidence. My now 7th edition of Weissenberger’s Federal Evidence was cited as “the authoritative text” on the subject by a New York Court (United States v. Schlesinger, 372 F. Supp. 2d 711, 720 [E.D.N.Y. 2005]). I also wrote the largest-selling student text on the subject of Evidence, Federal Rules of Evidence: Rules, Legislative History, Commentary and Authority. And then, I decided to become a novelist ….

What is the name of your latest book and what inspired it?
My latest book is a reissued 2nd enlarged edition of Made to Measure Man, about the inadvertent criminal and romantic entanglements in which a Chicago law school Dean becomes embroiled. I was inspired by, of course, tidbits from my own life experience as a Dean, but most of the plot twisting and its unforeseeable ending came from decades of working with cases in Evidence Law that are just “too strange to be fiction!”

Do you have any unusual writing habits?
Well, in this era of all-computers-all-the-time, I suppose it would be considered “unusual” that I wrote Made to Measure Man longhand, on legal pads, using various prized fountain pens that I collect!

What authors, or books have influenced you?
I believe an author is influenced by the whole of one’s reading life: from the didactic nonfiction from one’s education (be that formal or informal), from the plays one sees (and then reads), to classics of fiction, from yesterday or modern times.

I also agree with Stephen King, from his book “On Writing”–a book not recognized for the genius that it is, as King is dismissed as a “horror writer,” which is preposterous. (Read “On Writing,” and read his short stories penned as Richard Bachman, particularly one entitled “The Long Walk,” and then dismiss him as a “horror writer.”)

At any rate, I particularly agree with King’s quote from “On Writing:” “If you don’t have time to read, you don’t have the time (or the tools) to write. Simple as that.”

What are you working on now?
I have just published my second novel, Companions by Contract, another romantic legal suspense, but this one is racier, more thrilling, and more daring, but also heavy with humor!

I have two other books in the works: I have another novel almost completed, which has been described as (believe it or not) ““Garrison Keillor’s Lake Wobegon meets David Lynch meets the Coen brother’s Fargo!”

And as a lifelong, passionate magician, I am working on a nonfiction, popular culture book that will take both a fun and scholarly look at the role of magic in classic Hollywood films.

I am also starting to blog, particularly about what renowned cellist Yo-Yo Ma calls “Citizen Artists,” namely those artists who use their gifts to further social justice, and the mechanisms around how we can best utilize the arts in our global community to better our world.

In fact, The Weissenberger Artistic Alliance – “A Creative Cultural Consortium for Charitable and Developing Artist Support” – was designed to raise funds for its two charities (one academic, and one for cancer research, in my deep gratitude for now being a twelve year cancer survivor), and also to provide educational resources (stipends for retreats, workshops, etc.) for these emerging “Citizen Artists.”

So, in addition to writing the above books, I am working blogs, and on the cultivation of The Alliance–its Missions being funded by the proceeds of my novels.

So I work with a multi-media team whose COO is a friend/former student of 25+ years; she and her team man 4 Twitter accounts (aggregate of over 5,000 followers), 3 FB pages, and grew my LinkedIn from 1 connection to over 2,100. And, of course, they then interact on all these accounts, celebrating birthdays, anniversaries, commenting on the posts made by others, write posts, et al.

And from what she tells me? The toughest part about social media is that even when “promoting” one can only do so 20% of the time, and the other 80% of the time, one must post funny, newsworthy items of interest so as not to lose fans or followers! (I am told that the number of fans and followers you have is very important to independent bookstores in their decision to stock your book, to bookers on local TV stations when you are lobbying for a spot, and for a host of other reasons, including things I do not really understand or care to know about, such as “SEO positioning”!)

They are sending out massive newsletters to tailored lists (PLEASE join us at The Alliance! http://www.weissenbergerartisticalliance.com/), taking advantage of every promotion, actively solicit top Amazon reviewers, developing relationships on Goodreads, regularly updating the website, reading everything by the notable masters on marketing and promotion of (particularly) Amazon indie books, squabbling with KDP over revisions to keywords and browse paths, linking back to alumni networks at every school I ever attended or at which I taught (or was Dean) to get me into their Alumni bulletins, working press queries for bookstores and much more.

A recent big decision was to go wide distribution with Companions by Contract via Draft2Digital and not to put it in KDP Select.

And we cannot assess the benefit of any of this yet, as Made to Measure Man’s 2nd edition was so recently released, and then Companions by Contract right on its heels.

Next, she will be staging both Amazon and Goodreads giveaways.

And I hear there is a lot of writing personal letters to friends and family begging! (But this is the NORM for new novelists, especially in a crowded genre such as romantic suspense!)

Phase Two will be shooting a reel of me at home that her team can edit into web episodes for a YouTube channel, and also as demos for TV bookings. (This is a very connected multi-media film production company in Los Angeles–Legacy Entertainment Partners, LLC–legacyentp@gmail.com–that actually developed its publishing arm precisely for me, or rather, for The Alliance’s work (as my friend is not only a lawyer but a charity founder for social justice work).

Phase Three is utilizing Legacy’s industry relationships to adapt Made to Measure Man and Companions by Contract into TV movies, thus selling more books, and raising more funds for the charities and the Citizen Artists of The Alliance.

If YOU have any favorite methods or websites PLEASE let ME know, at glen@weissenbergerartisticalliance.com!

Do you have any advice for new authors?
1) Just do it. Join a local writing club, or one online if one is not nearby. They will keep you accountable.

2) Learn to say “NO” more than you have in the past; you must protect time to write.

3) Write even if you don’t “feel inspired.” One can ‘write one’s way’ into feeling inspired.

4) Julia Cameron’s concept of the Morning Pages, in “The Artist’s Way,” is invaluable.

The idea is to write, first thing in the morning, three longhand pages to empty oneself of all “chatter.”

I am doing Cameron a great disservice here: look her up, the concept of Morning Pages and also The Artist Date.

What is the best advice you have ever heard?
I am a devotee of quotes, so this is difficult to answer!

I must say that I often think on Albert Einstein’s “Never regard study as a duty, but as the enviable opportunity to learn to know the liberating influence of beauty in the realm of the spirit for your own personal joy and to the profit of the community to which your later work belongs.”

What are you reading now?
“The Western Canon: The Books and school of the Ages” by famed Yale professor Harold Bloom.

I read anything Harold Bloom writes. He is a master critical thinker who challenges conventional assessments of literature, and pushes me to do so as well.

And I am rereading a great old book, “Live from New York: An Uncensored History of Saturday Night Live,” by (then Tom Shales) & James Andrew Miller, which recounts the days from the inception of “Saturday Night Live” (basically 1975-2002) by direct, interwoven commentary clips from the performers, writers, producers, and executives.

A must read for any SNL fan.

What’s next for you as a writer?
To finish the two books I am working on now, and to continue to build The Alliance into a vital cultural hub for readers, authors, artists, and scholars committed to our mission that while the arts certainly entertain us, they also educate us, make us reflect, and drive social action.

My creative work and the development of The Alliance are wholly intertwined.

If you were going to be stranded on a desert island and allowed to take 3 or 4 books with you what books would you bring?
ARG!!!!

The complete works of Shakespeare.

“The Story of Civilization,” yes, all 11 volumes, by Will and Ariel Durant, for which they were awarded the Pulitzer Prize for General Non-Fiction in 1968 and the Presidential Medal of Freedom in 1977.

I will never get through all 11 volumes unless stranded on a desert island, plus I don’t know how long I will be stranded there!

And all the latest manuscripts from all the writers in my writing group.