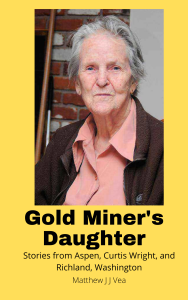 Do you like short stories from people who lived interesting lives?
Ethelyne Elvira Hendrickson Vea lived a full and interesting life and prospered thru the Great Depression, contributed to the US victory in World War II, raised four accomplished children who have given her 18 grandchildren, and 6 great-grandchildren. In Gold Miner’s Daughter, you will read a selection of stories from:

Aspen, Colorado during the gold and silver mining days
The life of a young Telephone Operator
Incidents from the life of a Curtis Wright Cadet
Stories from Dreams of Education
Stories from Richland, Washington
If this interests you, scroll up and click buy now!

Author Bio:
Matthew J. J. Vea is the son of Matthew Johnson Vea and Ethelyne Elvira Hendrickson Vea. He was born in1951 in Boulder, Colorado where his parents we attending Colorado State University. He grew up in their homes in Boulder, CO, Pittsburgh, PA, Las Vegas, NV, and Richland, WA. He is married to Nadine Louise Russell Vea and they have 9 children. He has a BSEE from the University of Washington in Seattle, WA. He has worked in the Electronics and Aerospace Industries since 1975 and is currently a Principal Engineer Hardware R&D working for Adva Optical Networking.