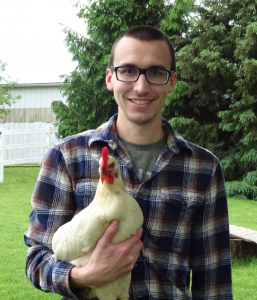 Tell us about yourself and how many books you have written.
To start, it’s easiest to say that I grew up on a farm. It was a horse-boarding farm to begin with but there were always other animals around just for the fun of it–pigs, goats, sheep, mini horses and donkeys, and much more. Since then it has turned into mainly an alpaca farm. Outside of animals and nature I have always enjoyed art, mostly through drawing sketches. I liked art so much that I went to college for art! Painting, to be specific. But now I’ve found that I enjoy writing so much more. I’ve written three books so far, however, the first one of those three (a low-fantasy novel about Greek mythology) was never released. It might later in the future, but until then it remains on the back burner. The other two books, “These Memories Don’t Exist: A Short Story” and “A Narrator’s Tale: The Dubious Efforts of Poor Men,” being a novel, are currently available via Amazon.

What is the name of your latest book and what inspired it?
My latest book is called “A Narrator’s Tale: The Dubious Efforts of Poor Men.” It’s a comic fantasy novel inspired by Terry Pratchett’s “Discworld” and “The Hitchhiker’s Guide to the Galaxy” by Douglas Adams. But wait, before you think, “oh, of course, you would say the two names of the funniest authors out there,” let me explain. I was inspired by the concept of Discworld, as a place, being this really absurd setting where anything could happen. That alone was the main catalyst for “A Narrator’s Tale.” As for Adams, the thing that stuck with me the most from his book was the omniscient narrator, who could just go off on random tangents and inform the reader about anything in the galaxy that may or may not be wholly relevant to the story or its characters. That was the second catalyst. “A Narrator’s Tale” definitely has that omniscient voice, but it’s a version where the voice itself essentially only thinks that it knows everything. And of course there’s an absurd setting.

Do you have any unusual writing habits?
Yes. My strangest writing habit is probably my most self-hated. It happens during my own editing process where I’m re-reading a section, or maybe even the whole story. I’ll add little notes here and there, mentioning to myself that I want this and that changed, or I want to insert a little blurb about whatever as to reference something else, and then I’ll jump back to that reference, edit it a little to line up with the past edit, and I repeat that process, jumping back and forth from the beginning of the story to the end, back to the middle, and all over. I don’t think I’ve ever edited a novel or short story of mine where I didn’t just go through it from beginning to end in a straight line. I always want to add or tweak things, and that gets me thinking about something else completely unrelated in the story somewhere else. My mind always jumps.

What authors, or books have influenced you?
I’ve read quite a few online interviews and bios lately about authors relating to how they got started. It seems that so many people mention how they’ve always been a bookworm since they were kids and being an author was always a dream until one day, surprise, their dream came true! I’m probably the furthest away from that as possible. I didn’t start reading for entertainment until I was in college. Prior to that, I had been a fan of essentially just Garfield, Calvin & Hobbes, and Far Side comics. Andrzej Sapkowski’s “Witcher” series was the first set of books that really sucked me in. After that, I began buying and renting books like crazy, largely fantasy and science fiction.

What are you working on now?
Currently, I’m working on a vengeful space opera novel revolving around a duo of mercenaries and their pet. Despite the whole “revenge theme” that it carries, I’m incorporating quite a bit of humor into it. Granted, some of that humor may be dark, but it’s humor all the same. I’m very excited about it because the possibilities of a space-themed story can get really bizarre and wild.

What is your best method or website when it comes to promoting your books?
I’m new to promoting my own work (very, very new), so I honestly can’t say what’s “best” just yet.

Do you have any advice for new authors?
I’m a new author myself, so I feel as though I shouldn’t advise others on how to jump through all the hoops when I haven’t even made it through the obstacle course.

What is the best advice you have ever heard?
The beginning is always the hardest part. My mom said that once, and I’ve found it applies to a lot of situations, whether it be packing up your house in boxes to move, planning a construction project, saying goodbye to someone, or staring at the next blank Word document before you start typing. The beginning is the hardest, yeah, but once you get going things will typically start falling into place.

What are you reading now?
I just began “A Dance with Dragons” by George R. R. Martin. No, I have not watched the whole T.V. show. Yes, I have heard some things about it (almost too much).

What’s next for you as a writer?
More writing! I’ve only just begun. I have so many ideas for new stories and for ways that I can expand upon what I’ve already written (currently published and unpublished). I’m an author, editor, format specialist, secondary editor, cover illustrator, editor again, and now I’m learning the ropes of becoming my own marketing agent. The writing is by far my favorite part and I wish I could do only that. Maybe one day I will, but for now I have to split my time between every self-publishing aspect that exists (except for the printing, thank goodness–Amazon handles that one).

If you were going to be stranded on a desert island and allowed to take 3 or 4 books with you what books would you bring?
I’m assuming this question has one of those unwritten rules about “books as books,” otherwise I would definitely grab the largest tomes I could, hollow them out, and pack them full of survival gear. But aside from that, I would bring along: “The Complete Sherlock Holmes,” “The Last Wish,” “A Game of Thrones,” and (for good measure) Outdoor Life’s “The Ultimate Survival Manuel.”