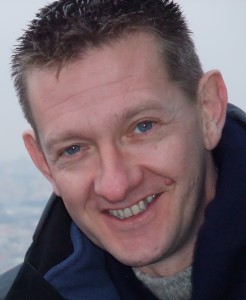 Tell us about yourself and how many books you have written.
I was born in in Hertfordshire, England in December 1965. One of my greatest influences in my early years was training in the Martial Arts. I began training when I was just 11, teaching from the age of 19 before obtaining a 5th Degree Black Belt in 1998. I still train today.

After leaving full time education I obtained a professional qualification in purchasing and supply management and (some have said) went on to build a successful career in both the private and public sectors. But despite winning a number of high profile awards for my work in procurement, I grew increasingly aware that I wasn’t doing what I really wanted to do – and that was to write.

To be honest I’ve been writing from an early age, making books for my parents as a kid. Then I just seemed to forget, sounds weird I know, but that’s what happened. Anyway about fifteen years ago I started writing screenplays, two of which got through to the final stages (one with Icon Entertainment and one with Working Title 2). However at the 11th hour neither idea got the ‘green light’. Now getting anyone to even look at a potential screenplay is almost impossible.

It was my wife and kids that told me I should write a book… and so I did.

I now live in Cambridge with my wonderful wife, Helen, and spend as much of my free time as possible writing. We also love spending time in America and you’ll see this influence throughout my books.

What is the name of your latest book and what inspired it?
My latest book is called Dominant Species (the rise of the vampires), hopefully the following will give you a feel: The year is 2033 and following a nuclear holocaust New York City is wrapped in the darkness of a nuclear winter. But it is a darkness that has unleashed an even greater horror…

I had the idea probably 20 years ago now (what’s that you say about procrastination? Is that not a true Author’s trait?). I was discussing a book with my wife that she had just finished by Anne Rice. My wife loves her books and she said, why don’t you write a vampire story. So I did, with a difference. Why didn’t I try and publish it then? Mistake number one, I thought there was too many vampire stories / films about – then look what happened!

The idea came form a ‘what if’ scenario. What if vampires existed and what if their only real threat, i.e.. daylight, was removed. The book creates this environment through the aftermath of a nuclear war and nuclear winter, which has seen their food chain seriously diminished. Faced with this, and in order to survive, they actually have to try and build a society. Something against their very nature. I wondered how these parasites might actually manage that – Dominant Species is my answer.

Do you have any unusual writing habits?
What like writing naked? No… no, scrub that – sorry. In reality? No I can’t think of any. I sometimes like to write with music on – not sure that’s unusual? I certainly like to have a rough outline of where I’m going, a journey if you will, and then I try and let my characters off the leash so they can get me there. But I do just love writing.

What authors, or books have influenced you?
I think I have a fairly eclectic taste, so there are many. Foremost, I love a good storyteller, so in the classics have always preferred Thomas Hardy to DH Lawrence for example. It was actually a Thomas Hardy book (Tess of the D’urbervilles) that was the first book I recall reading that brought with it a real mix of emotions, including frustration (why doesn’t she just tell him!!!!) to anger, sorrow and a measure of real despair. I’ve loved his books ever since.

In addition (and more up to date), I love Steven King books (and wonder at how he can make things that in reality are sometimes really absurd become so real and believable); Harlan Coben (clever and chilling); John Grisham (a great storyteller); Terry Prachett (beneath the humour a true philosopher), Lee Childs (action unfettered); Thomas Harris (read with the lights on) and a load of others including Peter James and David Hewson (the Nick Costa series).

What are you working on now?
I’m actually working on something very different at the moment, an action thriller called Retribution:

When a vicious Miami gang, with no fear of the police, brutally attacks a seventeen old girl leaving her for dead, they make their first mistake. Believing their actions will have no consequences is their second. Soon they are to learn that there are things on the streets far worse than themselves and one of them happens to be the girl’s father. His name is Jack Vincent and he has a past, a dark and secret past; one he’s not proud of. It’s a past that he’s tried hard to forget. But after the attack, Jack looks to that same past and embraces the darkness once again.

What is your best method or website when it comes to promoting your books?
I’m new to this promotion business, so am trying to learn myself. I think having your own website is important so designed and built my own at: http://www.guypettengell.com

Other than that, Goodreads and Kboards have proven to be the best I’ve found so far.

Do you have any advice for new authors?
Only the advice I finally gave to myself – If you love writing, just do it and do it now and don’t stop. That’s the advice I intend to follow.

What is the best advice you have ever heard?
If you want to change something, don’t try changing others, change yourself.

What are you reading now?
Steven King’s Doctor Sleep

If you were going to be stranded on a desert island and allowed to take 3 or 4 books with you what books would you bring?
Probably How to build a raft and How to escape from a desert island.

And to read at night: