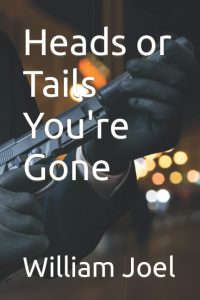 About Heads or Tails You’re Gone

A former commander of the Navy’s SEAL team two, Clyde Hayden, is new commander of the elite homicide division of the Phoenix Police Department. Clyde is happily married until his best friend, a Phoenix police officer, is murdered while responding to a domestic violence call. Clyde’s wife, Jeannie, has had enough, scared that Clyde will die on duty as well. She knows Clyde cannot leave his job and divorces him. Jessica, Clyde’s ex-fiancé when he was in the Navy, shows up shortly after Clyde’s marriage is on the rocks. Jessica ended the engagement after her father is murdered and she inherited a large sum of money. Jessica reaches out to Clyde for help against her abusive husband but doesn’t want to accept Clyde’s advice. Jessica kills her husband after finding him in bed with his mistress and then frames Clyde for the murder. During this upheaval a notorious serial killer, the Slasher, is wreaking havoc on the city murdering prostitutes and terrifying Phoenix’s female residents. The Slasher is Jessica’s stepbrother and his motivations for murder are revenge against Jessica for rejecting him as her lover and to discredit Clyde Hayden. The Slasher murders Clyde’s wife after he is beginning to reunite with her and his children. In the end, Hayden and Sharon, the brilliant and strong-willed female attorney who defends Jessica in the murder trial, overcome the Slasher. This psychological crime thriller is unique in its depiction law enforcement and the criminal trial proceedings against Jessica for the murder of her husband.

Author Bio:
I am a U.S. Air Force veteran who served at the end of the Vietnam war. The Air Force found that I had a talent for languages, so they sent me to language school. I served as a linguist for a section of military intelligence and spent several years at the National Security Agency (NSA). I was very interested in police work and later joined the state police. After some time in uniform, I was recruited to be a hostage/crisis negotiator and trained by FBI hostage negotiators in criminal and abnormal psychology, criminal profiling, and in the techniques used to “talk down” a hostage taker or someone barricaded with the intent to commit suicide. It turned out that I had a natural talent for it and never lost anyone. I retired after getting an advanced degree in psychology. I wrote my first novel in the mid-nineties but found I needed to learn more of how to express my creative imagination eloquently with descriptive and believable character depiction, dialogue, story line, and background. I love the idea of providing readers with entertainment and an escape into a different realm of their imagination with my writing. I continue to enjoy reading immensely and my favorites are mystery, science fiction, and fantasy. Originally from the East Coast, I transplanted West to Arizona. Maybe someday I’ll return to the East Coast area. I enjoy a close and loving family relationship my wife, my children, grandchildren and my siblings. I thoroughly enjoy writing and love to read. I have been listening to audio books lately, science fiction by Jay Allan. I enjoy gardening and love to walk or hike. I like photography but I’m not good at it. I’m excellent at shooting, a natural skill. When I was in the military I engaged in Tai Kwan Do and earned my brown belt. I was only a young guy of eighteen years of age. At the time I didn’t go for my black belt because it was full contact and I didn’t want to hurt anyone.