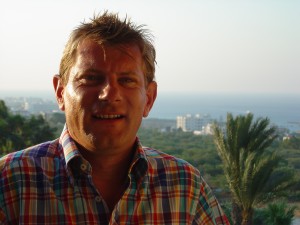 Tell us about yourself and how many books you have written.
I have spent most of my career as a magazine journalist, but I think that this job simply evolved from my love of writing. Although I have to say that the last thing someone who writes for a living wants to do is to come home after a day in the office and then spend several hours focused on their latest work of fiction! I have been very lucky in that I have had the time to pursue my own original fiction. And I know what I like; I like to write books that I would like to read. I know that sounds like a simple statement, but it is true. I was looking for a hard hitting bio thriller and I couldn’t find one so I wrote one. I am also very interested in political thrillers and thought that it was time we had a British antihero so I wrote a book with one.

So far I have written three books; ‘Virus’ and ‘Bullets & Bull’ and my latest ‘The Love Spell.’ My inspiration for these novels comes from many different places and I am not sure that I want to be one of those authors that is known for just one kind of genre. I do like writing thrillers and I like merging the fantastic with the contemporary, adding realism whilst not fooling the reader.

Anyway, I live in London, the best city in the world, and I like to use it as the backdrop to my novels whenever possible. The city has such a diverse cosmopolitan feel to it that it is really believable to base anything within its environs. All I hope really is that when the reader has finished my book that they have enjoyed themselves and been transported to another place and another environment where, just for a while at least, reality has been suspended.

What is the name of your latest book and what inspired it?
The name of my latest book is ‘The Love Spell’ Part One. It is called Part One because I have already started Part Two! Inspiration is a very abstract connection between witnessing, hearing, reading or feeling something that then leads to an idea that then links to another and another until suddenly you have a story. For this book the female characters came first. I know a lot of strong confident women and I wanted to use them in a story.

Where the idea of witchcraft came from I am not sure but I knew that although I had already created a comfortable suburban environment for them there was more to their characters. I think that the idea of a coven had been in my mind for a while and I knew that I would have to approach the subject matter in a whimsical and idealised fashion and this is the first book that I have written where the need for humour and comic interplay between the characters was important. Also important was the research. I might not know anything about witchcraft but there are plenty of people out there that do so I knew that I had to get the basics right and it was great fun learning about something that I had no knowledge of before.

Do you have any unusual writing habits?
I am not the fastest writer in the world. The Love Spell probably took almost a year to write and Virus was a stop-start project over a very long period of time. When I am writing a book, however, then I can pretty much do it anywhere. Sky Drive allows you to upload text and add/alter it from any computer which is great but most of the time I use my laptop. I always have the story line written from beginning to end so that I can keep a hold on where the story is going. I find otherwise that it is easy to write yourself into a creative corner that could take a lot of rewriting to back out of. As I am writing the story I also put in chunks of dialogue that come to me on the way. When I have finished the storyline then I print it out and have it with me for reference. Of course it might change, but not fundamentally. It is the foundation for the novel. Oh, and one last thing, always have your book proof read by somebody else. The worst proof reader is you. Let someone that you trust cast a detached and critical eye over the manuscript. It will pay dividends when you publish.

What authors, or books have influenced you?
I don’t know if other authors find this, but I will not read anything that has a similar story to the book that I am writing or that I am thinking about writing in the future. As such I cannot say that I have read anything that has really influenced me. I like the Game of Thrones series and I like classic Crichton and law fiction because I am probably not going to write anything like those. I like vintage Fleming as well.

What are you working on now?
I have so many books in me that I always have one or two bouncing around in my head at one time. At the moment, though, I am writing the second part of The Love Spell. I really love the characters so much that about three quarters of the way through the first book I decided that they had to have another outing so I purposefully wrote an ending that invited a revisit. At the same time I am writing the story line to a science thriller that will be set on the South Pole. There is also a time travel story that keeps coming back to me and which I did actually start to write before it all became too complicated and I had to take a step back from it. And also there is a sequel to Virus that I am currently plotting. Did I write ‘one or two ideas?’ I meant two or three and they keep coming, triggered by something that I have seen or read. It only takes two words to get an idea going – “what if.” I hope that is something that I never get bored of saying!

What is your best method or website when it comes to promoting your books?
Word of mouth is a good way to promote your book. The first people who know that I have a new book out are my Facebook followers, most of whom are my friends anyway. I always post the cover first to generate interest and then a bit of blurb about the book. It through Facebook that a friend of mine put Virus forward to be her book club choice one month, so that generated sales. I think it is difficult to promote a work that is only available as an eBook and I do hope to be able to produce paper copies of my books at some time. I am about to try and do some proper promotion for The Love Story using the local press and radio. I don’t think that there is any magical route to take with promotion that will guarantee sales, at least not for free. Advertising on Facebook does not cost much so that might be worth considering and if your book is about a certain trade or industry then target websites and organisations that cater to that sector. I am going to contact all the websites that I looked at for The Love Spell and drop them a line. You never know…

Do you have any advice for new authors?
Be original, be brave and write with passion. Remember that everyone has at least one story in them. Also, the old adage that you should write what you know about is a misnomer in my opinion. I have never written what I know about; the research is one of the best bits about writing. Be aware also that writing a novel takes time, so be sure that you can set aside the solitude that you will need – to many interruptions are not conducive to productive prose. As I have written above, plan your story properly before beginning, make sure that you have your conflict element in place and that the story flows from beginning to end. This probably sounds like common sense but it will all help your book to be more readable. Also, don’t forget to get it proof read.

What is the best advice you have ever heard?
The best advice really is to just get on and do it. When I published my first book – Virus – I had an article written about me in the company magazine. It was surprising how many colleagues came to me and told me that they were aspiring writers. Would I read their work? They asked. Of course I would when it was finished. I have not read a word of any of their manuscripts because they have never finished them. I guess what I am saying is that it takes focus and dedication to produce 70,000 words or more. So be ready for the journey.

What are you reading now?
I am on the fifth book of The Game of Thrones series and loving it. Such a vast canvas.

What’s next for you as a writer?
Next for me will be The Love Spell – Part Two. Once that is finished, I have the other ideas to turn into reality. I hope that there will be at least two books from me this year. I am really enjoying researching the book set on the South Pole – so many possibilities in a frozen, ancient and remote world. Watch this space!

What is your favorite book of all time?
There are too many fantastic books on this planet to have a favourite, but I am a bit of fan of disaster. The original Poseidon Adventure by Paul Gallico and The Tower by Richard Martin Stern are great examples of classic contemporary fiction and I would recommend them. As I have mentioned before Michael Crichton’s science drama disasters such as West World and Jurassic Park are also great reads.