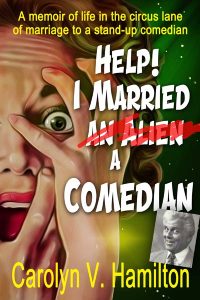 About HELP! I Married an Alien a Comedian: A memoir of life in the circus lane of marriage to a stand-up comedian

Every relationship contains a his version and her version of events, and Carolyn is clear that this is her version of her life and marriage. In this powerful memoir, she chronicles her experiences of love and world travel with her husband, balancing her career as a graphic designer and print communication professional with his comedy career.

In these vignette stories of their relationship, she reveals with honesty and wit the early years after they met at the Las Vegas Press Club, their courtship and consummation, their fund-raising wedding, their adventure in the U.S. Peace Corps, how the marriage ended, and their continued relationship after divorce, including his 80th birthday Las Vegas roast, and their move to Ecuador. At the same time, she reveals her emotional triumphs and sorrows, both public and private, as she lived them.

HELP! I Married an Alien a Comedian, includes a foreword by award-winning Las Vegas journalist and historian, John L. Smith

“With wit and candor, the narrative segues throughout the book between anecdotal episodes…eventful and engaging. Hamilton’s voice has an entertaining, humorous, and at times bawdy lightness that effectively suits the content. The characters are surely unique and readers will relish having a window into their lives.” – BookLife Critic’s Report

Author Bio:
Carolyn V. Hamilton is an author, watercolor artist, and Success Coach for memoir writers. She spent 30+ years in the real world of “Mad Men” as a graphic designer, illustrator, and copywriter.

A graduate of Antioch University Seattle with a B.A. in liberal arts, Carolyn V. Hamilton has won numerous creative awards including the Las Vegas Chamber of Commerce Community Achievement Award in Communications (1996), and been listed in Who’s Who in Southern Nevada.

Today, she makes her home in the Andean town of Cuenca, Ecuador, from where she says, “While I reside in Cuenca, I live on the internet!”

She is proud to have served as a U.S. Peace Corps volunteer in Suriname, South America. And, oh yes, in her “younger days” she was a Playboy Bunny.