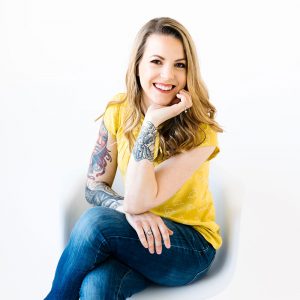 Tell us about yourself and how many books you have written.
Hi, I’m Holly. I’m a speculative fiction author who roams and writes in the Pacific Northwest. When I’m not writing, I’m usually chasing around my kids (two under 5!) and hoarding journals. I currently have three published books — two collections of flash fiction in a variety of genres, titled Unusual Diction Volume One and Two, and my new epic fantasy novel Daughters of Fire & Sea, book one in a new series.

What is the name of your latest book and what inspired it?
My latest book is Daughters of Fire & Sea: Book One, an epic fantasy novel about sisters, magical adventures, betrayal, war, and dragons. My head is constantly churning with new worlds and characters inspired by my love for fantasy, mythology, magic, and the beautiful outdoors. Daughters of Fire & Sea started as a ghost story about twin sisters who lived in an in-between place where the barrier between the living world and the underworld was thin. It quickly became a different story than I’d originally imagined, but I love how the characters changed and where their adventures took them.

Do you have any unusual writing habits?
My first draft is often peppered with italicized notes and probably reads a touch crazy. Some are helpful — actual questions or ideas I have about the characters, world or problems I need to solve — but some are complaints and admonitions from my harsh inner critic. We artists often like to torture ourselves.

What authors, or books have influenced you?
I love epic fantasy and some of my favorite authors who inspire me are Brandon Sanderson, Robert Jordan, Steven Erikson, Neil Gaiman, and Melanie Rawn. My goal is to write epic and immersive stories filled with fantastic magic systems, compelling characters, and vivid, complicated worlds. Though fantasy is my favorite, I love to read sci-fi and murder mysteries as well.

What are you working on now?
I’m currently working on the second book in my Daughters of Fire & Sea trilogy called The Dragon Flute. It continues the story from book one with more complications, dragons, and an important quest.

What is your best method or website when it comes to promoting your books?
Though my first flash fiction collection was published in 2015, I’ve only just begun promoting my work with the release of my fantasy novel. So far I’ve had success with my Instagram account (I love sharing my weekly flash fiction stories and nature photos) and I’m currently experimenting with other platforms and advertisers.

Do you have any advice for new authors?
Hire a developmental editor to read your story. They’ll often spot issues you won’t notice (head-hopping might be a problem or your character motivations aren’t clear or you might have unnecessary scenes you can cut) and will help strengthen your story if you’re willing to listen to their suggestions.

What is the best advice you have ever heard?
That’s a hard one, but what comes to mind right now is to write the story you want to tell and worry about marketing it later. The best story you can write will be something that matters to you, that is authentic to your voice.

Also, just keep writing. Work through the doubts and keep writing. If you continue working on your craft and challenge yourself, you will continue to improve and tell better stories.

What are you reading now?
I just finished a fantasy romance novel by a fellow indie author, Miranda Honfleur, called Blade & Rose which I enjoyed (fascinating magic, excellent high fantasy, and a great, edge of your seat ending), and I’m about to start Ninth House by Leigh Bardugo.

What’s next for you as a writer?
I have a long list of stories that I want to tell so my plan is to just keep writing and building new worlds. What I’ve released so far is just the beginning.

If you were going to be stranded on a desert island and allowed to take 3 or 4 books with you what books would you bring?
Hmm, that’s a tough one… I’d definitely pick two of my favorites, The Way of Kings by Brandon Sanderson and The Night Circus by Erin Morgenstern. For my other two (since I’d go with the max I could bring haha) I would pick The Eye of the World by Robert Jordan because it’s thick and interesting, and The Hitchhiker’s Guide to the Galaxy by Douglas Adams to keep me laughing. I’d also have my Kindle stashed somewhere so that’s a few more books to keep me busy, and hopefully, there’s one with some survival tips on there.