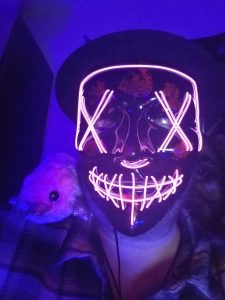 Tell us about yourself and how many books you have written.
Hi, I’m PlatypusTarot. I’ve written several novels but haven’t published any of them yet. Instead of writing another novel that would never see the light of day, I decided to change things up. I started writing an ongoing web series, and publishing mini-compilation ebooks with 5 chapters each.

What is the name of your latest book and what inspired it?
My latest book is Csick volume 1. It was inspired by reality television and the anime “Food Wars”. I always wanted there to be a reality show about writing. I watched “Food Wars” and fell in love with the competition and battles. I decided that I needed to turn that into a writing contest.

Do you have any unusual writing habits?
I love black licorice while I write. As for unusual, I don’t think so. Oh, my characters are influenced by the music I’m listening to.
With one novel I was writing my playlist included a lot of heavy metal. The main character quickly developed an anger problem.

What authors, or books have influenced you?
So very many. The first I can remember is the Hardy Boys. A little later I discovered Gordon Korman and he became my idol. Lillian Jackson Braun had a huge influence on my early adult years. Garth Nix and C.S. Friedman have both heavily influenced my fantasy work.

What are you working on now?
Right now I am working on an ongoing web series titled “Csick”
It’s an over-the-top fantasy world where anything can happen. The main character is self-aware and knows he is merely a character in a story. This leads to arguments between him and the writer. Another character is five raccoons masquerading as a human.
It’s been a blast to write, and I’m enjoying the absurdity of it all.

What is your best method or website when it comes to promoting your books?
I’m still fairly new, but Reddit has given me the most traffic for a free ebook.

Do you have any advice for new authors?
Keep writing.
Push through the blocks, even if you’re writing nonsense, the important thing is to keep writing.
This works especially well if you can manage to make it a routine, even just 10 minutes a day can make a world of difference.

What is the best advice you have ever heard?
Don’t eat the yellow snow.

What are you reading now?
I actually just got a graphic novel of “A Midsummer Night’s Dream” which is my favourite work by Shakespeare. I’m looking forward to reading it.

What’s next for you as a writer?
If things go well, I plan on continuing my web series. Once it reaches 40 chapters I want to publish it in paperback form with two bonus chapters and market it as Season 1. If things really take off, I’d love to revisit my older novels and get them ready for professional editing.

If you were going to be stranded on a desert island and allowed to take 3 or 4 books with you what books would you bring?
1 – Watership Down by Richard Adams (No question or hesitation)
2 – Losing Joe’s Place by Gordon Korman (It’s a juvenile comedy, but it brings me back to my childhood and reminds me why I want to be an author)
3 – The HitchHiker’s Guide To The Galaxy by Douglas Adams. Preferably a nice omnibus.
4 – The preview copy of my unpublished novel. It is and always will be an inspiration.