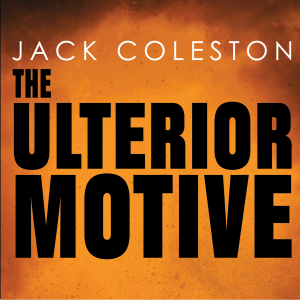 Tell us about yourself and how many books you have written.
I’m twenty-seven years old and I come from one of the most beautiful, yet out of the way countries in the world-New Zealand. Which might leave you wondering why I wrote a book about the United States and the Middle East, but I’ll answer that later.
I really love cars a lot! Along with reading, writing (bet you didn’t see that one coming) and just learning in general.
I have written one full-length novel, but over the years I have written a number of unpublished short stories, skits and plays for different events that I’ve been involved in.

What is the name of your latest book and what inspired it?
My latest novel is called The Ulterior Motive and it was inspired by three things: A nine year old boy, an old boss and Tom Clancy. If you want to hear the whole story you’ll have to buy the book because it’s in the back of it. To post it here would probably be a bit long…

Do you have any unusual writing habits?
I am the king of procrastination and distraction! I can easily get sidetracked when I’m doing research and end up spending time reading about things that don’t really relate to the scene I’m writing. Although sometimes this has given me fresh ideas for another part of the story so it all works in the end.

What authors, or books have influenced you?
I first read The Hobbit when I was eight years old, then I moved onto the Lord of the Rings and I really loved the Redwall series of books by Brian Jacques when I was a kid – That guy describes the most amazing world of talking animals and incredible feasts that make you hungry!
As I’ve grown older I have really enjoyed authors like Lee Child, Tom Clancy, Robert Ludlum, and Charles Dickens. I know Dickens is hard to read but I like listening to his books on Librivox when I’m going somewhere, they seem easier to get into when someone is reading them out loud. Dickens was a master storyteller, A Tale of Two Cities is definitely one of my favourites…

What are you working on now?
At the moment I’m working on the second book in the series, I think I’m going to call it ‘The Gamer’s Pledge.’ I don’t want to give too much away, but essentially a young hacker genius from North Korea has to flee to South Korea and he takes up e-sports and becomes really famous. North Korea sends a death squad after him and ends up killing his uncle instead. Out of revenge, and his previous political sympathies, he sets about trying to liberate North Korea from the communist regime by making a number of terrorist attacks look like they were intentionally committed on behalf of North Korea. It will have most of the same main good guys as The Ulterior Motive, apart from a Donald Trumpesque president which will be a very fun character to write.

What is your best method or website when it comes to promoting your books?
This is a hard question to answer, the fact is I get paid the most if people buy directly from the e-store on www.JackColeston.com. Having said that Amazon is the elephant in the room and I need purchases and reviews on there too. If you are considering purchasing The Ulterior Motive then I would suggest you do what’s best for you. It is available on Kobo, Barnes & Knoble and itunes/ibooks also.

Do you have any advice for new authors?
Buy a bunch of books on Amazon about how to write and study them well. Also I would recommend joining a group of writers where you can share excerpts of your writing for fair critiques. Other people eyes pick up on so many things that you miss when you are writing! It took twelve drafts to get this book out but it was worth it to have something that is polished and professional. I am part of Skywriters on Facebook (https://www.facebook.com/groups/SkyWrite/) it is a closed group but if you are a keen new author then I’d be happy to help you join. We have bi-weekly Skype calls and everyone is really friendly and nice, even when they tell you that something in your writing sucks/needs improving.

What is the best advice you have ever heard?
Don’t let anyone tell you that something isn’t possible. We’re not here in this world just to live for ourselves, everything has a purpose and should be done with a purpose. Be intentional in the way that you live and try and find a routine that works for you. If you have big dreams break them down into little steps, you’ll get there eventually!
It took me over two years and a lot of patience to get to publish The Ulterior Motive.

What are you reading now?
Last week I finished Echo Burning (Jack Reacher book 5) and then I started reading War and Peace by Tolstoy, and it’s pretty damn awesome! (I’m a third of the way through, it’s a long haul)
I’m also reading Max Hastings – The Secret War, it’s a non-fiction about spies in WWII and Max Hastings is the man when it comes to WWII volumes, but they are hard to with lots of heavy/depressing content so you don’t really want to read them all in one go.

What’s next for you as a writer?
I have ideas for four more books in the series (including The Gamer’s Pledge), after that I would like to write a dystopian Sci-fi novel because I am a Sci-fi geek among many other things. My idea is kind of like a reverse Martian set three hundred years in the future where an Anarchist hacktivist group hack into the nuclear weapons systems of the world and detonate half of them in the earth’s atmosphere to destroy all the electronics and wipe out a bunch of society with the other half…
I’ve also got an idea for an absurdist novel called ‘Troubled Joe’, it came out of a writing excercise I did a while ago. Basically everything crazy that could happen does happen to a gun-toting loner who hates everybody else but always manages getting dragged into situations where he has to help others.

If you were going to be stranded on a desert island and allowed to take 3 or 4 books with you what books would you bring?
The Bible, Robinson Crusoe and The SAS survival handbook