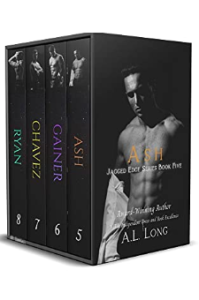 Ash: Jagged Edge Series #5
It’s funny how your past choices always seem to follow you. But when it becomes a mistake that you will soon regret, there is only one thing you can do ‘Fix it.’ Juliette Daniels wanted to do just that, but every time she tried to do the right thing, she ended up getting sucked in deeper and deeper. Her destiny was not her own, and one man controlled it. Her Master.
Ash Jacobs was a simple man, hard working with good morals, but the minute he met his sexy new neighbor, that all changed. His obsession with finding out who she was might have been the one thing to push her away, but there was no way he was going to give up until he found out the truth. Not even Sebastian Collins could stop the desire he had for her.
Gainer: Jagged Edge Series #6
When a person is at the end of their rope, the only thing left to do is survive. That is exactly what Emma Atwood had been doing for most of her life. Finally getting a break, she gets hired as a maid at a ritzy hotel but finds that it is still not enough. Tired of living the life she was handed, she does the one thing that she soon regrets. Greed soon turns into tragedy when her mistake begins taking lives. Reminded of the memories of his past, the only thing that Lou Gainer wanted to do was clear his mind. His thoughts get the best of him, and he ends up running into a mysterious woman. Captivated by her beauty, he does everything he can to get close to Emma Atwood. Opportunity knocks when Jagged Edge is hired as additional security at the hotel she works at. Pieces begin to fall into place when Lou finally learns the truth about Emma and what she has been hiding. Will his love for her be strong enough to keep her secrets, or will his need, to tell the truth, prevail?
Chavez: Jagged Edge Series #7
Working hard to graduate at the top of her class and becoming the best FBI agent had finally paid off for Agent Gabrielle Jackson. Selected to head one of the most important operations of her career, the unexpected happens when Jagged Edge Security is brought in to assist. The last thing that Gabrielle needed was to be attracted to one of the men. Trying to keep her distance, she soon finds that she can no longer resist the charm of Michael Chavez. Soon that all changes when she discovers that her past has a connection to the operation, and the only person on her side is him. Working with a woman like Gabrielle Jackson was something that Michael Chavez hadn’t counted on. Even with her cheeky Latino attitude, she was the sexiest woman he had ever met, and he had to have her.
Ryan: Jagged Edge Series #8
Following the same routine, day in and day out, Charlie Winters was about to give up on getting the break she deserved. Things begin to look up when her brother Nick suggested she come to New York to work at his landscaping company. Moving from the small town of Cedar Grove to the big Apple was everything Charlie dreamed of until her brother witnessed a brutal murder, which put his life in danger. Charlie would do everything she could to protect him, even if it meant contacting the boy she fell in love with as a teenager. Leaving the only girl he had ever loved, the last thing Ryan Hyatt expected was to run into her, especially in Manhattan. Regretting his decision to push her away after enlisting in the military, he tried to make it up to her by offering to protect her brother Nick. When tragedy stuck, he soon found that his brother Josh might be involved. Ryan would stop at nothing to protect the woman he would never stop loving.

Some would call me a little naughty, but I see myself as a writer of spicy thoughts. Being a romance writer is something that I never imagined I would be doing. There is nothing more rewarding than to put your thoughts down in words and share them. I began writing in 2013 and have enjoyed every minute. When I first started writing, I wasn’t sure what I would write. It didn’t take me long to realize that romance would be my niche. I believe that every life deserves a little bit of romance; a little spice doesn’t hurt either. When I am not writing, I enjoy the company of good friends and relaxing with a delicious glass of red wine.

Visit me at www.allongbooks.com for all of my new releases and book signing events.