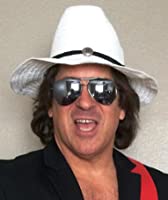 Tell us about yourself and how many books you have written.
I currently reside in Las Vegas, Nevada but that could change next year, next month, or even next week. I was born and grew up in Pittsburgh Pennsylvania and up until my late twenties, I had no desire to leave let alone relocate to the other side of the country. Somewhere around turning the age of 30 ignited some type of feeling that there must be something better out there and look beyond the Pennsylvania borders. I moved to North Carolina in a town not too far from the shore and lived there for almost 2 years but then environmental circumstances (Hurricanes!) made me look elsewhere. I returned to Pennsylvania but not in Pittsburgh but further north towards the Erie direction and stayed there for a few years. Since then, I’ve lived on an Indian Reservation in Arizona and different places in Las Vegas and currently live as the token Caucasian what could best be described as a ghetto of North Las Vegas. My life has been interesting, truly a journey. I’ve encountered hurricanes, blizzards, earthquakes and tornadoes. I’m here to safely say that I am still alive and kicking with only minor bruises and scars.
I have self-published 5 stories so far, I have another I am currently brainstorming on with a possible completion date as middle summer.

What is the name of your latest book and what inspired it?
MIKULA. The inspiration for this book came from watch too many B grade spaghetti westerns during the beginning of the pandemic. At first the idea was to do a spoof of the genre but as the book started to evolve, my attempts at humor weren’t very funny at least that was my take and the book took on a more serious direction. Don’t get me wrong, there are still some funny lines and situations, just not what I first envisioned.

The GAME-CHANGER. This book was written around the same time as MIKULA. They both started out as short stories but through the writing process became much more than that. The beginning of the pandemic influenced this as well as I had time on my hands that I did not anticipate so I took full advantage of the time. Television and movies inspired this one as it was more of a response to the unfairness and pain for victims and their families of serial killers. I tried to find a way to alleviate some of that pain through the story and I think I was successful with that goal.

Do you have any unusual writing habits?
I probably do. I don’t write anything down unless the idea has been in my head for a day or so and has time to develop. My scenes evolve like that and sort of write themselves. I find if I try to force something, the end product suffers but if I let the idea just swim around in my mind, an idea that I am happy with presents itself sooner or later.

What authors, or books have influenced you?
I was heavily into science fiction and fantasy when I was in high school and college. Tolkien, Asimov, Dick, Harrison, Bradbury, just to name a few. The original Twilight Zone and Night Gallery series had a huge influence on me and still does. None of more stories are alike in theme or situations so I find whatever idea I can put a beginning, middle, and end to and still find it interesting, then I will attempt to flush the idea out to its fullest. There are many 5 to 9 page starts that I stopped working on because they didn’t engage me as a writer, how can I expect someone to want to read something I don’t really want to write?

What are you working on now?
A story that evolves through decades and the changes time places on the way we think and act as we continue to gather experiences and knowledge. As I age, I start to question much more than I did when I was say 25 or 30 so my main characters reflect that and some of that directly influences the dialogue. I don’t want to give to much away but it will be more political than anything I have ever done.

What is your best method or website when it comes to promoting your books?
My website, janntomasko.net

Do you have any advice for new authors?
I think you have to have confidence in the story you want to tell. Accept criticism but remember what you want to say in the end. It’s your story, tell it the way you want.

What is the best advice you have ever heard?
Advice on self-publishing. I actually took a 2-3 hour noncredit course at the local community college on how to do it. Otherwise my first story (But I Didn’t Kill You!) would still be on my bookshelf collecting more dust.

What are you reading now?
I always have at least 2 books going at one time. I have been doing some research for my current project but I always need some pleasure reading which is usually light and about music, movies, or sports. What ever titles I would list here would be finished in a week or two so no reason to list them.

What’s next for you as a writer?
To become better at marketing myself and my brand.

If you were going to be stranded on a desert island and allowed to take 3 or 4 books with you what books would you bring?
That’s tough. I wrote an article years ago about the same situation but replacing albums instead of books. I had to make the list 25 because I couldn’t whittle it down to 10 let alone 3 or 4. I have never reread a book in my life and pass it along when I am done so to answer the question honestly. I would want all of my books with me because I designed all of the covers and am very proud of what’s inside and outside of each and every one of them.