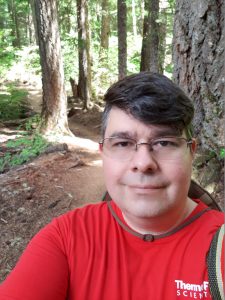 Tell us about yourself and how many books you have written.
I’ve just published one book so far, on Amazon. I’m also querying a fantasy novel with agents at the moment, with another waiting in the wings and two more in-process. Busy times!

What is the name of your latest book and what inspired it?
The book I’ve just self-published is a paranormal horror/humor short fiction collection entitled Around the Corner from Sanity. I went through a streak of writing short fiction, and most of it was that genre. Having grown up in an honest-to-god haunted house and experiencing ghosts first-hand, I naturally grew fascinated with the genre. I’ve got lots of real stories to tell, too!

Do you have any unusual writing habits?
I keep a very nice pewter dragon on my desk next to where I write. I think of it as my “muse.” And I have this habit of associating a song with each book, and you’d be surprised, I think, that it would seem to have little association at first. For instance, for my epic fantasy that I’m querying, White Lands Dragon, I’m inspired by R.E.M.’s “Texarkana.” It evokes a sense of epochs of time, for me.

What authors, or books have influenced you?
Tolkien, of course, for my fantasy, but also Weiss and Hickman with their Dragonlance series, as well as Stephen R. Donaldson with his Thomas Covenant Series. For horror, of course it’s Stephen King. And for science fiction, I’d have to say Frank Herbert with his Dune series, as well as Isaac Asimov with his Foundation series.

What are you working on now?
I’m working on two book projects. One is an epic fantasy, which is a sequel to my last one. It has four POV characters, including a demon-dragon, a human female mage, the ancient Gold Dragon, and a cruel human general. Wouldn’t you want to read a story from those points of view? I would! My other project is a space opera scifi with some erotic bits in it. It’s a fun romp through space with lots of quick action and a protagonist who is a rogue with impulse problems and a desire for alien lovers.

What is your best method or website when it comes to promoting your books?
I promote from my blog, with tabs for my published works, works in progress, and what I’m currently querying. Of course, there are my blog entries, too, and a great list of other blogs that I follow. Check it out: https://jasonkilgore.blogspot.com.

Do you have any advice for new authors?
Join a writer’s group. If there aren’t any around you willing to take you on at your level, then start a group. My writing simply wouldn’t be the level it is if it weren’t for honest feedback from fellow writers in my group, the Village Peeps of Corvallis, Oregon. My blog has a post on what to look for in a group and the rules we follow, in case you want to start your own.

What is the best advice you have ever heard?
I had a great writing instructor named Anne Warren Smith, who was also a children’s book author. She gave a lot of great advice, but one that stands out for me is “Write dialogue that’s worth eavesdropping on.” I’ll also share with you an equally good bit of advice I picked up somewhere not so long ago: “If your protagonist can walk away from a problem, so will your reader.”

What are you reading now?
I like to have multiple books going at a time. I’m reading “Dr. Sleep” by Stephen King (the sequel to The Shining), “Fledgling” by Octavia Butler (a curious vampire book), and an interesting werewolf story, “After Dark Vapours” by Brad Dunne. He’s a recent, self-published author. I think it’s important to support indie and self-published authors and not just stick with the famous writers.

What’s next for you as a writer?
Changes in my life have given me more time, and I’m capitalizing on it. As a result, my writing has taken off like a rocket. I’m looking to publish three books in the next year, hopefully via a traditional publisher, and get a literary agent.

If you were going to be stranded on a desert island and allowed to take 3 or 4 books with you what books would you bring?
How about a survival guide? LOL. But for the sake of entertainment, I think it would have to be a mix of funny, scary, and thoughtful — because that pretty much defines my life. I’m not the sort who re-reads books, in part because once I read a book it is etched in my memory forever, so they would have to be ones I haven’t gotten round to reading yet. So for those three areas, I’ll go with: “Last Words” by George Carlin, “The Haunting of Hill House” by Shirley Jackson, and “Zen and the Art of Motorcycle Maintenance” by Robert Pirsig.