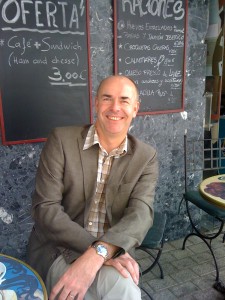 Tell us about yourself and how many books you have written.
I’m a Dublin-based freelance professional editor and author of five novels. I worked in a variety of blue-collar and white-collar jobs before spending two decades as an in-house editor for a U.S. academic publisher in its Irish office.

What is the name of your latest book and what inspired it?
“Breakfast at Cannibal Joe’s” is the first of my books to be published. The first draft was written way back at the turn of the century, on the cusp of the so-called Celtic Tiger, when some of us could already see it was going to end in tears. The Dublin it describes, however, is based on Pinochet’s Chile, with a few Hibernian tweaks.

Do you have any unusual writing habits?
I prefer to write longhand, with my favorite (heavy) Cross pen, before typing it all up and making changes. I then have to print the damn thing off before I can make editorial changes (with my pen again). That takes us to three drafts before I even start on a structural edit.

What authors, or books have influenced you?
Martin Millar’s “Milk, Sulphate and Alby Starvation” taught me that it was okay to write about everyday picaresque life in a comedic way without expressing contempt for the characters. Steve Aylett’s “Bigot Hall” showed me how limited most authors’ imaginations are by comparison. He offers literary pyrotechnics whose sparks ignite all manner of explosions in the reader’s mind.

What are you working on now?
The finishing touches to “Ivy Feckett Is Looking for Love: A Birmingham Romance,” which will be released next year. A nerdy romantic comedy about two geocachers who take on the Patriarchy and organized religion in the dark heart of England.

What is your best method or website when it comes to promoting your books?
I’m still finding out. Having my own website and using Twitter has worked okay so far.

Do you have any advice for new authors?
Ask yourself what it is that drives you. Are you writing for your own pleasure, because writing is an itch you have to scratch, to entertain others, or because you want to be famous? Your response to that question should guide what you write and how you approach your career.

What is the best advice you have ever heard?
People who live in glass houses shouldn’t throw parties.

What are you reading now?
The Stieg Larsson trilogy. It passed me by at the time, and I’m catching up. Half way through the second novel. The pace has picked up.

What’s next for you as a writer?
Novel No. 5 needs a second draft. It’s a encyclopedia along the lines of Flaubert’s “Dictionary of Received Ideas” but I’m trying to shape it so that comes closer to Nabokov’s “Pale Fire.” In other words, it will be an encyclopedia with a plot.

If you were going to be stranded on a desert island and allowed to take 3 or 4 books with you what books would you bring?
Not that I advocate book-burning in general, but anything that could make a fire bright enough to attract passing ships. Phone directories.