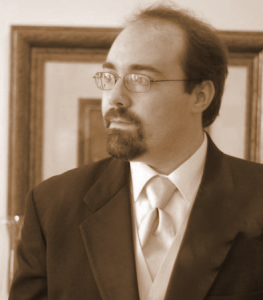 Tell us about yourself and how many books you have written.
I’ve always enjoyed writing. When I was a kid, I would write these short sequels to movies that I liked and give them to my mom. I did one for Duel and another for Maximum Overdrive. I was always fascinated by mysterious vehicles chasing someone relentlessly. We used to drive out to Colorado every summer and I would pick out a particularly sinister-looking car and pretend that it was following us. I can’t even imagine how many miles ticked by while I was running through some imaginary cat and mouse game.

As I got older, I started to focus more on music. I took up the drums and played in various bands. I loved packing up my gear and driving to shows, the anticipation of performing, and just being in that type of atmosphere. Unfortunately, music wasn’t paying the bills. I started in retail with the expectation that it would be a stop-gap until my music career took off. You might be surprised to learn that never happened. I ended up spending over a decade working for a very large and well-known company, and I had only one complaint: it just wasn’t me.

I was a father who barely saw his son, who was 2 at this time. I didn’t love my job. Heck, most days I flat out hated it. It paid the bills, but it was taking a lot out of me. I wasn’t happy. I wasn’t sleeping well. I dreaded going to work every day. Yeah, this is all whiny, and I know that, but I did what I had to do while I worked to find something that would be fulfilling on a personal level, not just financially.

During this period, which was around 2013, I revisited writing, knocking out a handful of short stories. I wasn’t thinking about a career change, I just wanted to write. By late 2017, things were reaching a breakpoint. I’ve struggled with depression and anxiety, both of which were exacerbated by the work that I was doing. I had a very vivid dream and something strange happened: I remembered all of the details long after I woke up. That never happens to me. I’m usually lucky if I can remember anything from a dream, let alone a dozen or more details.

That dream became the basis for Bermuda, my first full-length novel, which was published in August of 2018. It was an enormous learning experience, but I took everything as an opportunity to be better and to be more prepared for the next one. As it turned out, that “next one” was a horror anthology. I had ideas for a few short story ideas, so I worked on them and released them as Random Synapse Misfire, Vol. One in late 2018. Volume Two followed a few months later.

At the moment, I am prepping for the release of my second novel and have two more in the pipeline—aka, my MacBook’s hard drive—and enjoying life more. My goal is to entertain readers, to give them something to look forward to. I know what it feels like to get lost in a story and the heartache of finishing a really good book. That’s the type of feeling I want to instill in others. Above all else, I want to show my son—who’s now 8!—that you can follow your dreams and succeed as long as you’re willing to put in the time and the effort.

What is the name of your latest book and what inspired it?
My second novel is titled The Hangman’s Soliloquy and it is a direct sequel to Bermuda. I wanted to explore the fallout after a life-changing event occurs and the way that people adapt. Herman Ingram, the protagonist, serves as a fictionalized proxy of myself: cynical and sarcastic but ultimately driven by a benevolent spirit.

In the new book, Herman is crashing emotionally and mentally after the whirlwind events of the first installment. I wanted to put some focus on how he’s doing as a human. Yes, he’s still a crusty cynic, but it’s become more of a coping mechanism. Inside, he’s coming unglued and inching towards being suicidal. Having dealt with my own mental health issues, the last thing I wanted to do was create a caricature of mental illness. Herman is a person dealing with real issues that take a toll on him. The core of his personality begins to change and it becomes something that is hard for him to deal with.

I wanted to continue his story but not in a glossy way. There’s action going on, there’s still tendrils of the original story unfolding, but Herman himself is struggling to feel connected; he’s struggling to feel like himself. That resonates with me and was a key part in putting the focus where I did with the sequel.

Do you have any unusual writing habits?
Not really. Sometimes I sit in silence, sometimes I’ll listen to music. I did create some music for book trailers, at least that was the initial intention. I ended up with a complete soundtrack based around scenes from my books. I’ve found that listening to that helps spark me sometimes when I’m lagging, but that’s about it.

What authors, or books have influenced you?
Growing up, I read a lot of Stephen King. My mom had a lot of his paperbacks, so I started to pick them up and read. He has his own style and it has served him well, no matter what genre he’s writing in. That’s something I respect and admire. I’m also a fan of Cormac McCarthy. He has this uncanny ability to tell a bleak story in the most beautiful way. Telling a great story is one thing, but telling it in a way that really resonates with the reader is a skill all its own and both of them are truly skilled in that regard.

There’s another book that I love, mainly due to my lifelong interest in earthquakes. It’s a book called 8.4 by Peter Hernon, and it focuses on a catastrophic earthquake on the New Madrid fault that causes absolute destruction in Memphis and other cities in the Midwest. I love the way that the story builds, with small seismic events leading to the realization that something terrible is coming. It’s very vivid and has enough scientific jargon to be believable without being weighed down and cumbersome.

What are you working on now?
At the moment I have two projects that I’m working on, both continuations on Herman’s story. One is going to be more of a suspense-thriller while the other is going to tackle a very dark topic that plays into the duality of human nature.

What is your best method or website when it comes to promoting your books?
I’ve recently started utilizing Amazon ads—I’m really late to the party with that. There’s definitely a lot of work that goes into that: researching keywords, watching to see what works, knowing the right changes to make. It takes a lot of patience which, unfortunately, isn’t a strong suit of mine, but I’m working on it.

I use my mailing list and website as well as my social media accounts to keep people updated on what’s going on, both with my writing and life in general. I’m always on the lookout for new ways to let people know about my work.

Do you have any advice for new authors?
Write. There will be plenty of time where you may not feel inspired. The key to getting past that is writing. Sit down and start. You’ll be surprised at how easy it is to work past any sag in motivation. Try not to focus on editing while you write. Tell your story and worry about editing once you’re finished. There’s an old cliché in writing: you can’t edit a blank page.

I would also encourage you to focus on yourself. Find out what works for you and what doesn’t. Develop your own voice and style and tell the stories that you want to read. Have faith in yourself but set realistic goals. While we would all love to become multi-millionaire best-selling authors overnight, however, that shouldn’t be your expectation. Put in the work, be patient, be persistent.

The last thing I would say goes back to goals. Set a daily word count. Don’t beat yourself up when you miss but do everything you can to hit that mark. When you get on a roll, it can be easy to hit 2000 words per day and, at that rate, you could have a 60,000 word manuscript written in a month.

What are you reading now?
Ballad of the Whiskey Robber by Julian Rubenstein. It’s about an ice hockey goalie in Budapest who robs banks to supplement his income. It is absurd and hilarious and just happens to be a true story. After all, who could make that up?

What’s next for you as a writer?
Aside from writing, the focus will be on honing my advertising expertise. The trick is in finding the balance between writing and promoting and then fitting that in with everything else that life brings you. We’re taking a cross-country road trip in July, so that will be a welcome vacation, though my laptop will be making the trip with us.

If you were going to be stranded on a desert island and allowed to take 3 or 4 books with you what books would you bring?
The Stand by Stephen King

As I Lay Dying by William Faulkner