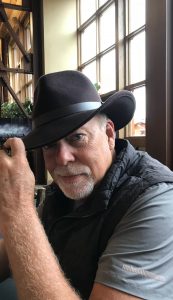 Tell us about yourself and how many books you have written.
Jeff Zwagerman who lives on East Lake Okoboji in Iowa and winters on Sanibel has his fifth mystery/thriller published by Black Rose Writers titled The Skinny. There are the fifth in the “Zander” series so far.

Jeff Zwagerman is a former educator who taught Speech, Theatre, and English. He was a high school principal and Superintendent of schools with a B.S. in Theatre and Speech, M.A. in Educational Administration, and ED.S. in Education.

His first novel, Always A Kicker was the first in the Zander series. A Full Bubble Off Plumb continues the saga of the broken and damaged character. The third book, South Of Sideways, finds the character drawn to the Florida Keys. The fourth book in the Zander series is called Tin Roof Rusted and is set in Southwest Florida, the Everglades, and Sanibel. The Skinny is the fifth in the series and involves Zander’s sometime hippie friend, Fats. He had quite a story from his past but hadn’t shared it with anyone. Now the reader finds out what happened to him.

The books are available from all on line sources and Black Rose writing.com.

The following is a short synopsis of Beyond Contempt:
Zander’s new romantic interest, Aubrey, is kidnapped right in front of him, and he never saw it coming. He needs to engage an old friend or two to help him try to attempt a rescue. Unfortunately, another problem rears its head before he has a chance to make good on his rescue plan. Zander finds out he’s a father. Before he has time to even process that fact, something else hits him right in the gut. His new born daughter has been kidnapped.
Ill advised decisions from his previous life continue to haunt Zander. When he finally has a chance to find happiness in the mountains of Colorado with Aubrey, everything falls apart. Most people might give up, but that’s when we find Zander at his best. He needs to be in control, and he needs to make his own plans.
Combining both sets of these problems, however, might prove to be too much even for Zander.

What is the name of your latest book and what inspired it?
I am currently writing the book “Protocol” and it is a continuation of the Zander series. We should be able to find out what Zander is planning for his newly acquired daughter and what will happen when he gets his girlfriend Aubrey back.

Do you have any unusual writing habits?
I try to write in the morning from 10 until noon. My goal is 2,000 words which I hardly ever accomplish.

What authors, or books have influenced you?
I’m especially fond of John Sanford and the Virgil Flowers series as well as the Davenport series. I also read Lee Child and C.J. Box. My favorite Florida author is Randy Wayne White and his Doc Ford series.

What are you working on now?
The next novel is the Zander series called “Protocol.”

What is your best method or website when it comes to promoting your books?
I’ve found that Facebook has been productive.

Do you have any advice for new authors?
Write your book. Worry about all the other things much later.

What is the best advice you have ever heard?
Write every day.

What are you reading now?
C.J Box

What’s next for you as a writer?
The vast unknown.

If you were going to be stranded on a desert island and allowed to take 3 or 4 books with you what books would you bring?
Some classics I think. East of Eden, To Kill A Mockingbird, Great Expectations. Maybe the Thorn birds and The Godfather.