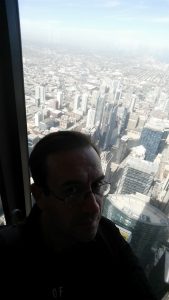 Tell us about yourself and how many books you have written.
I am a native of the Bay Area and a veteran of the wild clubbing scenes in San Francisco and the East Bay. I write, I run marathons, and I work as a software consultant and engineer. I have led a VERY interesting life, and I can’t keep all of the bizarre adventures to myself.

What is the name of your latest book and what inspired it?
My latest book is Called Crash Shadow: A Tale of Two Addicts. The worlds of a using addict and a recovering addict are eerily similar, in that it’s all about contacts, unwritten rules, and knowing when and where to address your drug life and trade. It’s a realistic yet harrowing look at the life of an addict, and I was compelled to write it to tell, not only my side of the story, but the stories of so many other people who struggle in the world of recreational narcotics.

What authors, or books have influenced you?
I have a lot of classic authors who influenced me: Dostoyevsky, Jack Kerouac, and others. Playwrights such as Dave Mamet and August Wilson have also been big influences, as well as more modern writers such as Hunter S Thompson and John Waters. But some of my other influences have been writers I personally know, such as Kim Acrylic, Bart Calendar, and other writers I have met who have personally shared their thoughts and writing with me.

What are you working on now?
I recently completed a play which I am trying to get produced, a play called Alex is Missing about four women in the punk scene who are trying to find a missing friend. I am also working on a sequel to Crash Shadow, as that book ends on a mystery.

What is your best method or website when it comes to promoting your books?
Facebook and Twitter have been my best promotion tools, especially Facebook. I have sold more books through Facebook than any other social media site. If you are promoting your works and you don’t have a Facebook page, get one!

Do you have any advice for new authors?
Keep writing. And keep promoting. Just do it!

What is the best advice you have ever heard?
Just do it.

What are you reading now?
Currently I am reading the autobiography of Motorhead’s singer Lemmy, White Line Fever. Life is oftentimes stranger and more interesting than fiction, and when I write fiction I try to give it that true-to-life uniqueness. I am also reading the new John Waters book Mr. Know It All.

What’s next for you as a writer?
Finishing my novel, trying to get my play produyced, and continuing to update my blog Terminal Berkeley Denizen.

If you were going to be stranded on a desert island and allowed to take 3 or 4 books with you what books would you bring?
Native Son – Richard Wright

And the Langenscheidt Deutsch als Fremdsprache dictionary, my favorite dictionary!