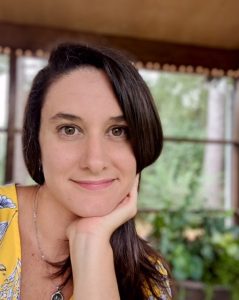 Tell us about yourself and how many books you have written.
My name is Jessica, and I’ve just released my debut novel, The Speawife’s Secret.

I did not set out to write a novel-length work. I was planning on working on a collection of short stories, retelling and updating some tales from Scottish mythology and folklore. After researching the tale of the kelpie, which plays a pivotal role in The Spaewife’s Secret, I felt there was enough of a premise to develop the idea from a short story into something longer.

I was fortunate enough to visit the Isle of Lewis in March and spent a week walking through the hillsides and getting to know the landscape that would become my story. I was about eight chapters in when I landed in Scotland for the second time and had done all my research up to that point through the internet, google maps, etc. It was surreal to be standing in the middle of it all; to hear the waves lapping at Bosta Beach, to feel the crunch of the grass underfoot, to see the loch where Scottish lore says the water horse hides. It was the trip of a lifetime.

Do you have any unusual writing habits?
Not really. It’s nothing formal, but most nights, I put my six-year-old to bed at 8 pm and spend the next hour or so writing. Sometimes I get some good stuff and sometimes its crap, but I try and write something every night.

What authors, or books have influenced you?
I have odd reading habits. Sometimes, I’m reading several different books at one time, stretching myself thin between reading all of them and my own work. Other times, I can’t get through a few pages without feeling unenchanted by the words in front of me.
As for influences, I would say that after reading Tracey Chevalier’s Girl with the Pearl Earring, I knew I wanted to be a writer. I go back to that book time and time again. It’s my go-to book if I feel like reading, but don’t have something I’m overly engrossed in. There is something captivating in the simplistic nature of the story.

I also have a soft spot for authors Peter May and Paula Hawkins and their nontraditional approach to writing. Until I read Girl on a Train, I don’t think I’d ever read another book that flipflopped between characters and chapters. Peter May goes does something similar in his Lewis Trilogy. The Spaewife’s Secret follows in a similar vein, as the chapters alternate between a childhood and adult version of the same character.

What are you working on now?
Right now, I’m editing my second book, Bone in the Blood, which follows the tangled lives of three different woman who are all affected in different ways by the Catholic Church’s answer to unwed mothers in 1950s Ireland. I hope to be releasing this book in late spring or early summer 2019.

I’m also in the beginning stages of research for a third book, tentatively entitled Gypsy Witch.

Do you have any advice for new authors?
Write, every day. Just write something, even if it’s bad, just write. Eventually, something good will come out.

What is the best advice you have ever heard?
Be happy with what you have; someone out there right now is wishing they had what you have.

What are you reading now?
Currently, I’m very into obscure memories that I’m reading as research for another project I’m working on. I’m currently in the middle of Gypsy Boy by Mikey Walsh and have The Yellow of the Broom by Betsy Whyte waiting patiently in the wings.

What’s next for you as a writer?
I want to get back to short stories, which is what started all of this for me. I love short stories. So somewhere in between editing, writing book number three, I plan to spit out a few more short stories next year. I’d love to put them together as their own book one day.

If you were going to be stranded on a desert island and allowed to take 3 or 4 books with you what books would you bring?
Girl with the Pearl Earring, for sure. This is my go to book.

A collection of Edgar Allen Poe’s stories for sure.

and The Great Gatsby.