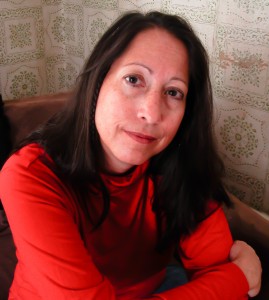 Tell us about yourself and how many books you have written.
I spent most of my life trying not to be a writer. I was a symphony cellist, a software engineer, an engineering supervisor, an actor, a director, even a press director for a Presidential campaign and finally a homeschooling mother. But I always had little scraps of stories floating around in my computer, and I often had characters tugging on my apron insisting that they had something to tell me. If anyone had asked me what my passion was, I would have had to say writing. So why did it take me so long to figure out that that was what I should be doing? It’s a long story.

Anyway, I finally gave in and wrote some plays for family theatre (adult professional actors performing for families) and got such a kick out of seeing my characters come to life on stage that it convinced me to accept that writing was what I should be doing.

So now, I live in North Carolina with my partner and my cats, and I spend most of each day writing. When I’m not writing, I’m running or working out or practicing aikido or repairing something in my 100+ year old house.

As of right now, I have two novels published, both in the same dark fantasy series, the Lords of Syon Saga, but I have several others on the burners, as well as some short stories.

What is the name of your latest book and what inspired it?
My latest book is called Guardian Last, and it’s actually the second book of what I expect to be a four book series. Both its title and the title of the first book come from a prophecy in the first book, Sword of Hemlock, in which a child’s toy wooden sword is a catalyst that puts the prophecy’s fulfillment in motion, a strange and not very well understood prophecy which begins with the end of a war.

Many things inspired the series, ranging from seeing the reactions of soldiers as they return from deployment to the difficulties of having gone from being a career woman (analogous to being a knight for my main character) to entering the different world of being a stay-at-home mother (analogous to my main character’s acceptance of her life in a world at peace). But at its heart, the series is about freedom and whether one’s virtue can be “prophesied” and thus taken away, or whether it is still subject to free will.

I suppose one thing I do that may be different from other writers (and may not) is that I do not plot out my entire book or series in advance. I create my characters as completely as I can, bringing my acting and directing expertise into the mix as well as my literary background, and then I see what they will do on their own. It’s a more “Deistic” approach, I suppose, than some might take. But I killed a few stories early on by plotting them out completely, only to discover that my interest died as soon as I knew the ending. So I suppose it’s a little game I play with myself that no one gets to know the ending until it’s written, even me.

In a few instances, this has proven … interesting. A heretofore minor character in Guardian showed up and made simply told me she needed to go to a place. I asked her why in the world she needed to do that, and her answer was so surprising that it changed the face of everything going forward,

What authors, or books have influenced you?
I’ve always been a sucker for adventure, heroism, virtue triumphing over evil. I love stories that go beyond just what we can see before us, even if only by implication. I could claim influence from everything from La Chanson de Roland forward, and that would not be an exaggeration, but my primary influences are William Shakespeare, Alexandre Dumas, Victor Hugo, Nathaniel Hawthorne, Frank Herbert, Gene Wolfe and Roger Zelazny. If it seems a bit horror and science fiction heavy for a fantasy author, that could explain why my series is rather dark.

What are you working on now?
I’m working on a few short stories requested by my publisher for an anthology they’re putting together which should come out early next year. I’m also working on book 3 of the Lords of Syon Saga, as well as a novel based on the basic outline of Sleeping Beauty and a more mainstream piece of fiction set in the ranchland of southern New Mexico where I grew up.

What is your best method or website when it comes to promoting your books?
Because I already had an established presence on Facebook, I still rely on my pages there to get a new release some immediate visibility. I recently got on goodreads, and I’ve had some success there, as well. The reality is that for small press and indie writers, we’re just not going to get the visibility with readers that the big houses can pay for. If they don’t see us, they can’t possibly know if they like our books or not. So we must take advantage of every possible avenue to get the word out.

Do you have any advice for new authors?
Before you commit yourself to a story, have in mind the “why” behind the story. What is it that is making you want to tell THIS story right now? Then don’t lose sight of that “why” while you write. If the answer is “I want to be a writer,” or “I want to be rich and famous,” that intention will come through.

Beyond that, the best advice I can give is a paraphrase of the advice my sensei used to give whenever people would start bogging down in philosophical hoohah or pedantic nitpicking and overthinking about martial arts. He’d say, “shut up and train.” Well, I would tell new authors, “shut up and write.” 🙂

What is the best advice you have ever heard?
Don’t show your work to anyone other than your editor or publisher, especially family or friends, until you consider it finished. Painters and sculptors keep a drop cloth over their work until it’s “ready,” and I think as a writer, I find it works best if I keep that metaphorical drop cloth over my work, too. This probably runs counter to what other people say about getting input early on and so forth, but I find that input too early can be very discouraging even when it’s meant in the kindest possible way.

What are you reading now?
I’m reading an old Irish epic, the Battle of Magh Rath, but I’ve also picked up Heinlein’s Stranger in a Strange Land again, after discussions on goodreads touching on the sexist aspects of it. I hadn’t read it in years and years and had driven that part of it out of my mind, remembering the basic story “with advantages,” as Shakespeare would say. It’ been eye-opening. 🙂

What’s next for you as a writer?
I’m always trying to improve my skills as a writer, and I’m always looking for those things I shy away from, not because they’re ‘bad theatre” but because I don’t feel comfortable writing about them. When I find something like that, I set to work to clear out that weakness. I think Aurora, the book based loosely on Sleeping Beauty, and the novel I’m setting in New Mexico which is tentatively titled “Windmills,’ will push me in some directions that will test my boundaries. And I’m really looking forward to it.

But first I need to get these short stories out and finish Lords of Syon.

What is your favorite book of all time?
I agonized over this one. I even asked my partner if he ever remembered me choosing a favorite book. It’s really a toss-up between “The Count of Monte Cristo” by Alexandre Dumas and “Notre Dame de Paris” (The Hunchback of Notre Dame”) by Victor Hugo. Both have a depth and intricacy that I love. That’s not to say that I don’t love many works of modern fiction, as well. I absolutely do. But my all-time favorites are those two.