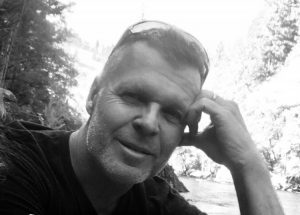 Tell us about yourself and how many books you have written.
At this point in life useless for anything but writing and emergency situations requiring force and on-the-fly MacGruberisms, I find myself in a state of dormancy until things get dodgy. This is the current angle of repose of a fifty-one year old, ex tree climber, ex alpha-male who’s shed his larval shell. Currently a sensitive male tuned in to the disappearing frail beauty of the world.

I’ve written two books. The first is an exorcism, a book of shorts titled Divided Dog and Other Stories. The second is a full length Pacific Northwest gothic crime novel with supernatural overtones, Two Hours Before Winter.

What is the name of your latest book and what inspired it?
Two Hours Before Winter takes place in the early seventies northern British Columbia, just after the Alaskan pipeline was greenlighted. It follows two mounties working the area as an influx of men pass through to find work in the pipeline man camps. Women were going missing then, still are, and the mounties struggle to find the killers while their own lives unravel.

The seed of the idea came long ago when my wife told me about a teenage girl that went missing in her hometown when she was young. She was there when the father and mother were told their child had been found. It was a horrible scene. I thought ‘what would a woman do to avenge something like this.’ A scene played out where a woman was pleading with her husband to use her as bait, to bait her out like a salt lick for killers. That was one of the seeds for the story. Where the rest came from…from the stratosphere. It’s out there. You just need to be listening.

Do you have any unusual writing habits?
Unusual? I treat it like a job. Like contract work. I don’t know what other writers do. Sometimes I’ll do a few hours in a day, other sessions will be a month of ten hour days, particularly when the end is in sight, everything’s coming together and it’s beginning to read well. That is the jolt. When it’s all accelerating toward a fine sharp point. I just don’t want to stop for fear of falling out of the zone. Now that I’ve finished Two Hours Before Winter, I’ve got this post-partum feeling running through me, like I should be doing something else. I’m all keyed up on the inertia of closing the story, and suddenly I have to take off the writer/editor cowboy hat and put on the marketer/self-promoter fez. I’m trying to make it fun.

What authors, or books have influenced you?
Hemingway’s The Sun Also Rises when I was a teen.
Frank Herbert’s Dune when I was twenty-two.
McMurtry’s Lonesome Dove and Horseman, Pass by when I was late twenties.
Cormac McCarthy’s Blood Meridian. One of the best books I’ve read for the sheer honest portrayal of the violence in men.
Ken Kesey’s One Flew Over the Cuckoo’s Nest broke my heart. A great book reeking of Oregon. If you’ve ever lived in the state you know what I mean.
William Gay’s short story collection: I Hate to See That Evening Sun Go Down. The Paperhanger is a classic Southern Gothic short.

What are you working on now?
I’m working on another novel set in the early part of the civil war that I’m excited about. It follows a character named Cartwright through the hellacious battle of Fredricksburg and beyond, all the way around the horn and up the west coast. I hope to have it finished in a year. It’s now 09-13-2020. I just gave myself a deadline.

What is your best method or website when it comes to promoting your books?
I have to say that Amazon and Goodreads so far are the best promotional platforms for the money, which means free. I haven’t ‘made’ it yet, so I don’t have the built in marketing machine that the big publishers do. Things are changing. One has to adapt. These two websites allow the author to engage with their potential audience.

Do you have any advice for new authors?
Develop your own voice and be true to it. Read as much quality writing as you can.

What is the best advice you have ever heard?
Probably Stephen King saying something like: ‘Want to be a writer? Write four hours a day and read four hours a day.’ Also, Cormac McCarthy saying ‘you must treat it like a job. You must show up even when you don’t want to.’ I’m putting quotes around this, though I’m sure it’s not word-for-word what they said. The kernel of the idea is there.

What are you reading now?
Right now I’m reading Tom Franklin’s Hell at the Breech. Tom Franklin is a good writer to study, and I have a specific weakness for Southern Gothic. I don’t think he’s written a poor book.

What’s next for you as a writer?
Next for me as a writer, the only three things I can think about are: promoting my recent novel, finishing my next novel and reading good stories.

If you were going to be stranded on a desert island and allowed to take 3 or 4 books with you what books would you bring?
Blood Meridian, Cormac McCarthy
Suttree, Cormac McCarthy
A Tale of Two Cities, Dickens
A huge blank tablet and a brick of ink pens.