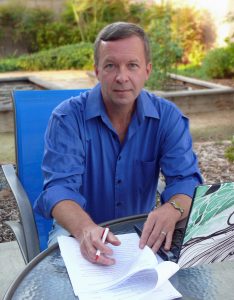 Tell us about yourself and how many books you have written.
My career path has a lot of twists and turns in it. After active-duty service in the U.S. Air Force (during which I worked at the White House), I supervised the information-technology department for the construction manager of the Los Angeles subway.

Instead of succumbing to the usual outlets for a midlife crisis (sports cars and cheerleaders), I studied art history and set design and became a game artist for Activision and 3DO.

Following the terrorist attacks in September of 2001, I decided it was time to get a “real” job. Having received training in emergency management through my work in the Air Force Reserves, I entered the field as a civilian working for the Contra Costa County (CA) Office of Emergency Services, then moved to similar functions at the University of California at Riverside, Sprint and Ericsson, and now Buena Park, California. I retired from the Air Force Reserve as a lieutenant colonel; my last two assignments were as an intelligence officer.

I’ve been diving since 1999 and hold advanced open-water, rescue diver and EAN certifications. I’ve been intrigued by shipwrecks and maritime archaeology since growing up watching Jacques Cousteau, Sea Hunt and National Geographic specials on TV. In 2006, I studied maritime archaeology with the Aegean Institute in Greece.

I’ve been writing since I was in fourth grade and wrote my first full-length work (narrative nonfiction) in high school. I started with novels after a twenty-year break. The Collection is my third published novel.

What is the name of your latest book and what inspired it?
It’s THE COLLECTION, an international crime novel.

I’ve been interested in art-related crime for some time. The art market is both weird and fascinating — almost completely unregulated, awash with money, and largely irrational. There are nearly as many types of art-centric scams and crimes as there are types of art. It’s surprising there aren’t more novels about art crime (other than forgery, which gets most attention).

Once I finished my thriller SOUTH, I was looking for another project. I’d written a quasi-Hitchcockian suspense novel called FAKE back in 2007 that dealt with Nazi-looted art, but it never worked right. I thought I might try to fix the problems and revive it. The fixes never worked, either, so I ended up junking most everything and coming up with a new plot. This is how THE COLLECTION was born.

Do you have any unusual writing habits?
I practice just-in-time research. I know of authors who research everything up front and spend ages doing it. How can you do that if you don’t know what your story is? So I do just enough to let me map out the story, then research additional material as I need it.

This works best on settings. When I get to the appropriate scene, I’ll research that location hard and use what I find for set-building and to block out the action. That way the information is as up-to-date as possible and is fresh in my mind while I write.

What authors, or books have influenced you?
I grew up reading Alastair Maclean, Jack Higgins, Ian Fleming and John D. Macdonald. (Yes, in junior high and high school — there was no such thing as YA then.) They had a much stronger attachment to reality than a lot of thriller writers do now (even Fleming — the Bond books aren’t much like the movies).

Now I read Alan Furst, Daniel Silva, Philip Kerr, Don Winslow, and I’m starting to go back to John LeCarre. I made the mistake of reading LeCarre in my twenties and didn’t really get him. I recently re-read The Spy Who Came in From the Cold, and now that I’m Alec Leamas’ age, I totally understand the book and the protagonist.

In nonfiction, I love Stephen Ambrose, Barbara Tuchman and David McCullough. They can make history read like fiction and still boost your IQ.

What are you working on now?
I’m working on the sequel to THE COLLECTION, called STEALING GHOSTS. Our hero, Matt Friedrich, is hired by the family of a Holocaust victim to steal from a museum a painting that the Nazis stole from the family, and then the Soviets stole from the Nazis. Needless to say, it doesn’t go as planned, and not everything is at it seems at first.

What is your best method or website when it comes to promoting your books?
I’m still looking. Goodreads is a good source for reviews, although unfortunately, they don’t always make it out to Amazon of B&N. I’ve had decent luck with Kindle Books & Tips for e-book sales. I manage to sell paperbacks at most of my personal appearances, which is about the only form of marketing I actually enjoy, so I’m hoping to do more of those. I tend to get more hits on my website when I write an article for Criminal Element (criminalelement.com), but I have no idea if those translate into sales. Discoverability is still a massive problem if you don’t have a Big 5 ad budget.

Do you have any advice for new authors?
Read. A lot. Read widely and critically in your chosen genre. Figure out what works and what doesn’t.

Write. A lot. Pick a small number of craft-related how-to books – written by actual authors, not people who only write about writing – and learn from them.

Join a critique group. You may need to try out a few before you find the right one. This not only allows you to get live feedback on your own writing, but by critiquing you learn what works and doesn’t work by reading other people’s writing. Critique also helps you build up the scar tissue you’ll need in order to survive the publishing merry-go-round.

Your first novel is going to suck in an enduring and spectacular way. As we said in the sandbox, “embrace the suck.” It’s a learning experience. Bury it someplace and move on.

What are you reading now?
I just finished GOMORRAH by Roberto Saviano. It’s an expose about the Camorra (Neapolitan mafia) that I reviewed for Criminal Element.

My TBR pile is truly getting out of hand. High up on the pile are: THE ART OF THE STEAL, by Christopher Mason; SAVAGE SEASON, by Joe Lansdale; GUNSHINE STATE, by Andrew Nette; Declan Burke’s ABSOLUTE ZERO COOL; and ZOO STATION, by David Downing. My next book will probably be one of those. Or not.

What’s next for you as a writer?
Depending on readers’ reception of THE COLLECTION and how soon I get tired of writing about the same characters, I hope to be able to continue a series (The DeWitt Agency Files) exploring different aspects of art-related crime. This may extend to issues such as counterfeit wine (yes, it’s a thing), fraud in classic car sales, and knockoffs of luxury goods.

Somewhere along the line, I’ll probably take a break and write another thriller. It exercises a different set of muscles.

If you were going to be stranded on a desert island and allowed to take 3 or 4 books with you what books would you bring?
It depends on how long I’m on that island… I’m not big on re-reading novels. Once I know how they end, I just can’t budget the attention to go through them again. I might take a David McCullough box set or Shelby Foote’s Civil War books. If I get a choice, though, I’d probably ask for airdrops of The Economist and Smithsonian magazines.