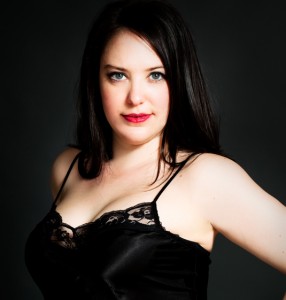 Tell us about yourself and how many books you have written.
I’m a freelance writer with degrees in both creative writing and philosophy, so I try to combine these in my work, whether it’s humorous, erotic, noir, or otherwise. I was born and raised in a suburb of Chicago, but moved around a lot after that, eventually ending up in Montreal, where I received one of my degrees, got my start writing professionally for the local paper, and met my kick-ass husband. We are currently living in southern California with our literary kitty, Ned. It’s quite a change from the crazy Canadian winters, so we love it.

I’ve written a lot of books, mostly centered around sexy happenings in Montreal, which has been described as “the Sin City of the North.” I take that moniker pretty literally with my titles The Montreal Guide to Sex, Where to Get Laid in Montreal, Top 5 Reasons You Can’t Get Laid in Montreal, Double Trouble, The Unbelievably True Story of the World’s Worst Sex (a modified version of which originally appeared in Josey Vogels’ sex column) and my latest, Naked Montreal. I’ve also written a satirical ninja novel for adults, entitled Ninjas of the 512: A Texas-Sized Satire, based on my sojourn in Austin, Texas, which is one of the most overhyped cities I’ve ever visited. I am sure to receive hate mail about this opinion, but I stand by it.

Additionally, I’ve recently started a series of haiku ebooks, the first of which is Haiku For Lovers. I have plans to do a series of city-themed books later on this year. You can find all the details about that at Buttontapper Press (http://buttontapper.com).

What is the name of your latest book and what inspired it?
Naked Montreal is my latest book. It was inspired by my stint as a sex columnist in the city. I wrote a lot of articles about people in the sex industry and its fringes, which I consider the real Underground City (as opposed to the mall that connects to the metro, which Montrealers refer to as such), but a lot of the material I had didn’t actually make it into the column. So I decided to write a work of fiction, based on some of the people and places in Montreal, with a central character who is a sexy tour guide, introducing readers to all of these places. She’s a bit jaded, having seen it all, but she enjoys her work, showing off the back alleys and bordellos of the city to tourists.

Do you have any unusual writing habits?
Is procrastination unusual? Probably not. But I will definitely fall down the rabbit hole of internet research, looking for a specific detail and then opening door after door into different websites, learning all this awesome stuff, and then looking up at the clock like “Holy crap, it’s 6 o’clock already?!”

I also write best in the nude, but I suppose that’s true for most writers, if they are being honest.

What authors, or books have influenced you?
I’ve been heavily influenced by humorous works like The Hitchhiker’s Guide to the Galaxy and anything by David Sedaris, literary fiction like Leonard Cohen’s Beautiful Losers (check out the sentient vibrator scene and you’ll understand) and Jeanette Winterson’s many fantastic books, and of course Nabokov’s Lolita. I enjoy all kinds of books, so I draw from a pretty broad range of influences. Ray Bradbury, Dorothy Parker, Charles Bukowski, Anaïs Nin, Paul Auster, Friedrich Nietzsche, George Orwell, Inga Muscio, Mary Roach…. It’d probably be easier to just check my Goodreads shelves to get an idea. I love to read, so anything that catches my eye will be given a chance.

What are you working on now?
I’m currently working on finishing up part two of my Naked Montreal series. I have plans for four parts, so there’s a lot left to write, but part two is in the editing phase. I’m still pretty immersed in that, but I’m also writing a lot of flash fiction these days, so I’m hoping to send those out for publication and perhaps collect them all into one big volume at some point.

I’ve also been participating in the A to Z Blog Challenge during the month of April, so I will most likely release an ebook of all those posts. I have been writing on the theme of Montreal from A to Z, so that’ll be a good introduction to the city for those who are looking for something with a little less racy material.

What is your best method or website when it comes to promoting your books?
Promoting my books is always a challenge, since they do tend to be on the more scandelous side. So you can’t just walk up to a total stranger and ask if they’d be interested in reading some of your erotica. Similarly, a lot of websites are anti-erotica (which is funny, because it’s such a cash cow these days), so it does take more persistence. I would say that the best method is just to keep on writing and putting out new books, so that readers have more to choose from. I also think blogging and guest blogging is really beneficial, as it helps me reach new audiences every time I have a new post, and if they like what they read, it’s easy for them to find my website and buy a book.

I would also suggest chipping away slowly at big goals. Write short pieces, and string them together. Eventually you’ll have a novel. Writing is definitely more like a marathon than a sprint, in that respect: you just have to keep on going. Train every day, stretch those imaginative muscles, and keep your eyes on the prize.

Also, I would definitely avoid that old phrase “write what you know.” Get away from everything that you know and let yourself play. See where your mind takes you. Go crazy. Be bold. But don’t just write a transcript of something that really happened. The worst stories I’ve ever read have been defended with the phrase, “But it really happened!” If I wanted what really happened, I’d read the paper. Surprise me!

What is the best advice you have ever heard?
Don’t be a snob: read everything. Good or bad, it will teach you more about writing. It’s never a waste of time to read a book.

What are you reading now?
I’ve always got several books going simultaneously, so right now I’m finishing up the book version of Sex and the City (very different from the TV show), starting Gilded Lili: Lili St. Cyr and the Striptease Mystique by Kelly DiNardo, and I’m about halfway through By the Balls: The Complete Collection (a noir collection by Jim Pascoe and Tom Fassbender). I’m also trying to get a copy of Neil Gaiman’s Fragile Things for a book club I’m involved with, but “A Study in Emerald” and “How to Talk to Girls at Parties” are both online on his website, so at least I’ve read those!

What’s next for you as a writer?
Wow, that’s a big question! I would ideally like to be able to write fiction full-time. Right now I do have a day job, some of which involves writing and some of which doesn’t, but being able to write novels or short stories for a living is definitely the dream. To that end, I’m researching small presses and looking for publishers that I can work with, even though I do also enjoy self-publishing a great deal.

As far as ideas in the pipeline, I’d also like to write another ninja story, so I’m pondering storylines for that. My ninja is a very reluctant assassin, so she’s a complex character to begin with, and I’d like to continue to explore that in additional books.

What is your favorite book of all time?
I can’t pick just one, so I would say that my favorite humorous book is The Hitchhiker’s Guide to the Galaxy by Douglas Adams. My favorite literary book is Beautiful Losers by Leonard Cohen. And my favorite novella is Breakfast at Tiffany’s by Truman Capote.