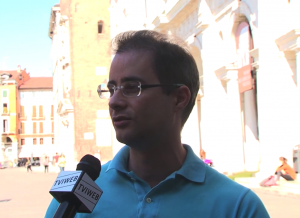 Tell us about yourself and how many books you have written.
I am an Italian writer most known as the author of RAMBO YEAR ONE, the unofficial and literary prequel of the Rambo-films. My saga was personally permitted to worldwide freeshare by bestselling novelist DAVID MORRELL after a two years long censorship.
Please note that I am Italian, and that when I publish any of my works translated in English I usually get some revise work from a pro, but to write here on Awesome Gang it’s just me, so please don’t mind if I sound any odd. That said…
Despite being nothing more than an E-book released for free due to copyright reasons, RAMBO YEAR ONE ended up being extremely acclaimed by the critics. It was critically acclaimed by various VIPs in different countries including US, UK, Italy and Germany. The appreciation words from the CALVINO award in particular and BBC’s broadcaster LINDSAY JOHNS (yep… The one and only BBC…) stunned me literally. A couple of years and two more Rambo-prequel novels later, sometimes I do still ask myself if it happened for real, of I just dreamt about it.

What is the name of your latest book and what inspired it?
I am currently working on the fourth novel of my Rambo-prequel saga. It’s inspired by the movie FIRST BLOOD of course, but also from the time I spent talking with many Vietnam era veterans, including some former special forces. The real inspiration for my saga was finding inside some history books so many ‘larger than life’ soldiers… that they made the Rambo character look like if he was just ‘one of the many’. Also, after a lifetime long interest in the Vietnam war, I knew more than enough to write a decent historical novel… And that was it. I was inspired, I had the means to do it… I wrote it.
The fact that a work like that was ‘doomed’ to stay in freeshare status for ever… It was a painful part of the process. I won’t be a hypochrite and say I am happy about it. I gave my best anyway but the only reason I did it, was because I had good idea and freesharing it was my only option.

Do you have any unusual writing habits?
I take writing as a job.
I met many writers in my life but never find a single one of them thinking about writing as a job like any other. I think this due to the fact that I am a ghost writer too, and I often works for other people and never thought about writing as something easy.
I think about writing in terms of ‘work’ or ‘sports’, and I put a lot of importance on the ‘working out’ part.
If I despise a genre, I immediately start trying to write something of the genre I hate the most. I then waste those ‘exercises’ (you will never read any of them for sure!) but the truth is that creativity is a muscle, and you learn more from writing BAD works when you feel lazy and un-motivated rather than when you have a very brilliant idea and you are extremely motivated.
Give it a try at what I am saying, and after a couple of bad works written just ‘to push yourself beyond your limits’, you have will find an ‘upgraded’ ersion of yourself. I consider creativity as a muscle and the more you use it, the better.
That’s something no one ever got right about writers like Stephen King, in my modest opinion.

What authors, or books have influenced you?
S. King (his ON WRITING essay in particular), Edgar Allan Poe, George Martin, Dino Buzzati, David Morrell, Beppe Fenoglio and many writers of Vietnam-war related memoirs and history books, like Neil Sheenan’s pulitzer winning book ‘a bright shining lie’.
There are tons of writers that helped me shaping my ideas about writing and too many to mention them all.

What are you working on now?
I am working on some dialogues for a theme park, I am writing the review of a tv series, I am self-translating one of my novels in English and self-editing another one.

What is your best method or website when it comes to promoting your books?
It’s the facebook. Being my saga for free, I have no ‘real’ budget at disposal to promote myself, and I earnt most of my readers by a mouth to mouth process only.

Do you have any advice for new authors?
They are the usual ones every writer say: read a lot and write a lot.
Experience matters.
A writer that wrote four complete novels is a better one than the one he used to be back when he had never written any.

What is the best advice you have ever heard?
I would say S. Kings ‘don’t create a plot, find one’.
That’s the reason why I think writers should be explorers, not creative people.
Creativity is for the movie industry, but the literay world is much more demanding.
You can’t just create this and that… Your mind must push yourself into the unknown.
Go there, okay? Go there and try to get back with a complete novel in the process.
And don’t be scared about failure for your best book is alway the next one, not the current one.

What are you reading now?
I am reading a Vietnam war memoir and Ken Follet’s PILLARS OF THE EARTH. It seems it’s one of the many classics ‘everybody should read once in his life at least’, thus I am reading it and ejoying it that far.

What’s next for you as a writer?
I am preparing myslef for my ‘post-Rambo’ career.
A professional recently told me that there’s no future for ‘the guy who wrote the Rambo-prequel’. We will see.
My first all original short novel will be released this year.

If you were going to be stranded on a desert island and allowed to take 3 or 4 books with you what books would you bring?
Pet Semetary, A scanner Barkly and a best of Edgar Allan Poe’s tales.