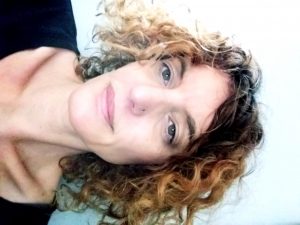 Tell us about yourself and how many books you have written.
I grew up in Ireland and the only regret I have about my childhood was we didn’t have many books . At ten I was reading my neighbors Mills and Boon’s for want of some. I always wanted to write and started my first book at 12, but I realized pretty rapidly that I had not much to write about. From there, I started talking about traveling and never stopped. I left after college and came back after five years and started writing.
I wrote four books before moving to the States and doing a Masters in Creative Writing and two more books after that as well as a short story collection. But these were not meant to be published. They were stepping stones to ‘Debris’.
Between novels, I love to write short stories. They make you look at the world around you while the novel submerses you in your own world. My linked short story collection also set in Ireland is forthcoming with Fomite Press.

What is the name of your latest book and what inspired it?
Debris, and it is hard to say what inspired me towards it, as it was years in the making. I don’t mean the actually writing of the novel, but acquiring all the tools to make the novel what it is. Debris started off as a re-write of an earlier manuscript. Andre was always there, and there was always the accident and his move to his aunt’s house. But the earlier version he started using drugs. Erin was his girlfriend in England and played a small role. When I decided Andre should meet her in the estate, Debris became a different story completely. The great part was all the characters had already been put in place for ‘Debris’ so it felt as if I was moving towards it without realizing.

Do you have any unusual writing habits?
No, not really. With three daughters, a husband, and a dog, I write any change I get. I do like early mornings whenever I get up.

What authors, or books have influenced you?
That is such a hard question and I wish I had made a list of all the books I’d read. Still there are some books that come to mind straight away. Margaret Atwood and especially Alias Grace when my opinions and perception of a certain character was thrown on its head. “Maps of Lost Lovers’ by Nadeem Aslam, I had to buy for everyone I knew. I loved the world he created and I was stunned by his beautiful writing and imagery. I remember thinking that I wanted to write like that. Of course, Michael Ondaatje, for the brilliant way he lets a story unfold, particularly ‘The Cat’s Table.”
During my masters, I fell in love with Latin American Writers, I’d always enjoyed Gabriel Marcia Marques but this added with Rosario Ferres, Borges, and Cortazar, it was impossible that the Latin American writers and magical realism would not to have an influence on me. In ‘Debris’ the influence, I believe is clear

What are you working on now?
I have just finished a second short story collection that I will put in the drawer for a while before revising. and I am revising my novel ‘Patient 55’ . Patient 55 is set in Ireland amid the controversy of the drug Metropone (M), a drug that erases bad memories. In order for the drug to work, the memories need to be written down and the patients need to undergo months of psychological assessment. I won’t say anything more for now.

What is your best method or website when it comes to promoting your books?
I think reviews are great. Debris has been getting great reviews on Amazon and Goodreads which is brilliant. I also have an author face book page and have ‘Debris’ on Goodreads. but I don’t think I have a best method yet. I’m pretty new to the game of promoting books and have no idea about twitter or Instagram, so it can be daunting.

Do you have any advice for new authors?
Just keep writing any chance you get. Don’t say that you have no time, make time, and read as much as you can. It is so important to accept feedback and criticism. I know it can be hard as a new writer, I didn’t like it at first, but now I thoroughly trust my readers. Feedback is not criticism, its clearing the way to make you become a better writer.
Don’t let the set-backs get you down either. Dust it off and move on, and eventually they will come less and less. And try to stay true to what you want to write.

What is the best advice you have ever heard?
Oh that is a hard one. But it was my friend who advised me to do a Masters, I didn’t think I would be able to having come from Ireland, but she insisted I needed to learn from others and be with other writers. At the time it was exactly what I needed. In terms of writing, Be Patient, and nothing is every done on the first draft.

What are you reading now?
Lily King, Euphoria

What’s next for you as a writer?
What can there be , only to continue writing and honing the craft. I’ve the screenplay done for Debris, and I would like to do more of those. I have so many stories that I’d written before Debris that I will re-visit and re-write.

If you were going to be stranded on a desert island and allowed to take 3 or 4 books with you what books would you bring?
The collected works of Flannery O’Connor and William Trevor.
George RR Martin, the Game of thrones series. He is brilliant.