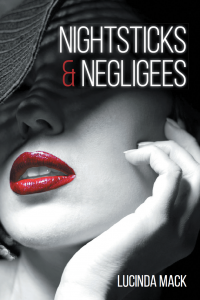 Tell us about yourself and how many books you have written.
I am a person who has written since the age of ten. It was the way I coped with being paralyzed from the waist down. I contracted rheumatic fever, juvenile arthritis, asthma, rocky mountain tick disease and Scarlet Fever all at the same time. Last rites were given to me on many occasions over the three years that I suffered. Friends and family were kept away because the doctors thought I was contagious. I was left alone in a room for the most part. Writing became my outlet and my passion. My companions became the characters I created and their worlds became my playground.
To date, I have penned over 30 books and hundreds, if not, thousands of poems.

What is the name of your latest book and what inspired it?
My latest book is Nightsticks and Negligees. It was inspired by two movies. The first, was “Pride and Prejudice” which starred Keira Knightley. The music score took my breath away. The second movie was a mini series called “Slasher.” The main star was Katie McGrath. The murders and the soundtrack enthused me. It was an inspiration birthed by both of those movies that set my digits to the keyboard to write my book.

Do you have any unusual writing habits?
My compulsion to write comes out of the blue. It could be from art, music, movies or just the beauty of a gurgling stream. My writing is organic; it arrives without notice. The whole process is difficult for some people to understand. It is part of who I am and I am comfortable with the method.

What authors, or books have influenced you?
I have read almost everything that Agatha Christie has written as well as Arthur Conan Doyle. In addition, I like some of the poems of Edgar Allen Poe and books by James Patterson

What are you working on now?
Nightsticks and Negligees Two, among other things.

Do you have any advice for new authors?
Don’t let the words of others take away your joy from doing what you love.

What is the best advice you have ever heard?
Life can be difficult and challenging; however, if you truly want to live, you must embrace it no matter what strings are attached and no matter what the consequences.

What are you reading now?
“Third Degree” by Greg Isles.

What’s next for you as a writer?
If inspired, I would like to try my hand at science fiction stories. It would be a great challenge.

If you were going to be stranded on a desert island and allowed to take 3 or 4 books with you what books would you bring?
“Justice Burning” by Scott Pratt, “Spandau Phoenix” by Greg Isles, “The Last of the Mohicans” by James Fenimore Cooper.