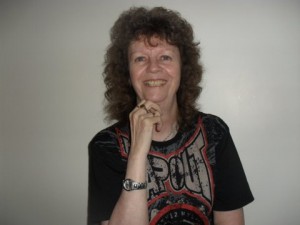 Tell us about yourself and how many books you have written.
I live in the north west of England and work as a data analyst for one of the local Health Authorities. I have been a prolific reader all my life, and for many years have spent the majority of my free time writing. As well as being educated up to degree level, I have completed courses and received diplomas from ‘The Writing School Ltd’ and ‘The Academy of Children’s Writers’. My aim in life has always been to write, and I have had a sideline of freelance writing for more years than I like to admit to having lived. This has mainly involved published articles in such magazines as ‘Prediction’. I have also completed two children’s novels, ‘Caution: Witch in Progress’ and ‘Zac’s Destiny.’ ‘Caution: Witch in Progress’ was published by Ghostly Publishing in 2013 and is available in paperback and on kindle on Amazon worldwide. I am currently working on a very different children’s humorous fantasy, ‘Be Careful What You Wish For’, and a fantasy novel for young adults titled ‘Dimensions’.

What is the name of your latest book and what inspired it?
My children’s humorous fantasy,’ Caution: Witch in Progress’ was published this year by Ghostly Publishing, and launched at Earl’s Court Book Fair in April. I have always loved to read fantasy. It is escapism into worlds we can only imagine, full of colour and fascination. Terry Pratchett introduced me to humorous fantasy, and I have never looked back since. What a writer. I like to think that he has been my inspiration for my humorous writing, and my witches of course! As to witches in general, I feel they have had a hard time of it over the years. There may be some bad ones (though mine are not!) but throughout history alleged witches just seem to have borne the brunt of other people’s misfortunes. If someone’s crops failed, they blamed the little old lady with the hunched back who lived down the road for walking past. If their cattle died, the cross-eyed woman stared at them funny. Tell me, how else could she stare at them? I thought it was time to follow in the footsteps of my hero, Terry, and try to raise an appreciation for witches for a change. Many of the persecuted ones in our dim and distant past were probably little more than healers and herbalists. ‘Caution’ is mainly just a story that was inside me. I love to write humorous fantasy, and even if I’m not trying to be humorous, my writing has a habit of turning that way unless I keep a very tight rein on it. I began the story and it developed quickly. Before long the characters took over, and kept me going until they had reached their last page.

Do you have any unusual writing habits?
I tend to approach writing in a way that some might find long-winded and time consuming, but it works for me! I like to scribble my ideas down quickly using pen and paper in long-hand. I write each chapter in this way, then before I get on with the next one I type up the chapter on my computer. At this point, I take more care with spelling and punctuation, and tend to add bits, or even take them away. Once completed, I read through the chapter and make any more necessary changes. I then send the chapter to a friend who proofreads for me. In this way, I feel that the first draft of my book has already had at least some polish along the way saving time in rewrites later.

What authors, or books have influenced you?
Terry Pratchett has to be my main inspiration these days. He is a legend in the world of humorous fantasy. I was also greatly inspired and introduced to fantasy by JRR Tolkien in my teens. Since then my favourite genre has stayed firmly in fantasy. I feel that authors are likely to want to write in the same genre they enjoy reading. This is certainly true in my case, anyway. Along with Terry Pratchett I currently love to read Terry Brooks, Joseph Delaney, Angie Sage and F.E.Higgins, to name but a few.

What are you working on now?
I have just completed the first draft of another children’s humorous fantasy titled ‘Be Careful What You Wish For.’ Here is a brief synopsis:

‘Finn is a bored young leprechaun. He wants something exciting to happen, but never having been blessed by the Good Luck Fairy, he soon gets far more than he bargained for. This is no fairy tale…’

I am also working on a YA fantasy titled ‘Dimensions’

‘When Leah first sees the old necklace in the window of an antique shop, little does she know what life has in store for her. Increasingly drawn to the pentacle on a silver chain, Leah finally buys it and soon finds herself having strange dreams about Stonehenge. Trying to put the dreams to rest, she visits the ancient site; only to be transported into another dimension.

Leah arrives in a besieged land of wizardry, magic and demon might. The land needs the help of an Outlander, and to Leah’s disbelief and shock, she has been called.’

What is your best method or website when it comes to promoting your books?
I tend to try to promote as widely as possible. I find new sites by surfing the net and Facebook. I approach any sites that look suitable for promoting my work, and try to get my book advertised and/or author interviews. I must say I am very impressed with the support offered to authors by the Awesome Gang, who not only provide great promotion themselves, but also offer links to other great promotional sites. Well done for that, you guys!

Do you have any advice for new authors?
Don’t give up. You are very unlikely to have your life’s work snatched up by the first publisher or agent you send it to. Be prepared for the long haul, but believe in yourself, and don’t lose hope. There could be someone out there just waiting for your book to drop on their desk. The hard part is finding them…

What is the best advice you have ever heard?
I think the best advice comes from authors who have made it, but are honest about how hard it is to get to the point where your books are published and selling. It is always useful to read famous authors slants on the process of becoming a published author. It is a hard slog, but well worth it in the end.

What are you reading now?
I am currently reading ‘Snuff’ by Terry Pratchett. Terry has never disappointed me, and I don’t think he ever will.

What’s next for you as a writer?
Next will hopefully be the publication of my sword and sorcery children’s fantasy, ‘Zac’s Destiny’ later this year, then the acceptance for publication of ‘Be Careful What You Wish For’. Who knows, if there could be a film version of any of my books in the future, then my dreams would be complete! If I shoot enough arrows out there, one might hit the target…

What is your favorite book of all time?
I probably have to give credit to Lord of the Rings for that. An epic read, indeed, and still as popular now as it ever was. Lord of the Rings has stood the test of time, and should still be classed amongst the greats in another hundred years or so.