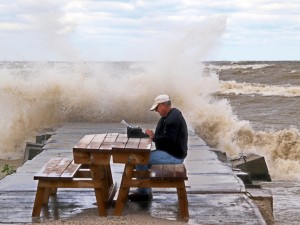 Tell us about yourself and how many books you have written.
Mine was a childhood blissfully misspent riding my bike without a helmet, playing sandlot baseball without an umpire (and keeping score) and exploring the uncharted woods, ravines and creeks at the very edge of the urban sprawl of civilization in St. Louis, Missouri, completely unsupervised. Besides girls, my main interests growing up were playing guitar, airplanes and reading. I majored in English and Philosophy, got a pilot’s license and, to date, have written five novels, four of which I have self-published.

What is the name of your latest book and what inspired it?
My latest novel is Somethin’ for Nothin’ which will be released on Groundhog Day. It’s a tale of adventure/misadventure that takes place during the construction of the Trans Alaska Pipeline in the Seventies. I was reading a lot of non-fiction about bush pilots in Alaska and, I don’t know, maybe I watched Animal House (again) or something, but I got this idea about a couple of college roommates who dropout of The Ohio State University and head north to get rich working on the pipeline, but get in way, way over their heads — as is clear right from start with the plane crash scene in the Prologue, which is actually the end of their adventure. It’s an odd mix of Frank Capra and the Coen Brothers.

Do you have any unusual writing habits?
When I had a day job that involved a lot of airline travel (my territory included 25 states and 5 Canadian provinces) I got a lot of scribbling done while enroute from here to there and back. I guess being locked in an aluminum tube seven miles above the earth is as good a time as any to force myself to focus on the sometimes difficult task of putting words to paper. Now I just get up at O-Dark-Thirty and spew forth words into Scrivener.

What authors, or books have influenced you?
Mark Twain and Catch-22 would be number one on the Author & Book lists, but there are so many others: Shakespeare, Tennyson and Eliot for verse; Dostoevsky, Tolstoy and Chekhov for fiction (I took Russian in college); Kurt Vonnegut, Thomas Berger and Carl Hiaasen for fun. And if I’m going to be completely honest, I’d have to admit to also being influenced in my story telling by the likes of Alfred Hitchcock, Steven Spielberg and George Roy Hill.

What are you working on now?
I’m pounding out the first drafts of three new novels. Jungleland is a sequel to My Brother’s Keeper, which finds Hawk as a mercenary pilot during the Belgian Congo civil war. The other two are as yet untitled. So far, I’ve set my stories in the 40s, 50s, 60s & 70s, so next up is a mystery/legal thriller set in the 80s. The third one is something completely different for me: the first in a series of futuristic Sci-Fi police procedural stories.

What is your best method or website when it comes to promoting your books?
I have to admit that I am behind the power curve on the marketing and promotion of my books, but I’ve had luck with sites like Goodreads and the Awesome Gang. I also hand out my publisher promos at art walks, book fairs and author events. Frankly, I find meeting and talking to folks out in “Meatspace” (as opposed to Cyberspace via social media) is a lot more fun and personally satisfying.

Do you have any advice for new authors?
Never give up. My personal creed is “persistence to the point of stupidity.” You’ll never win if you forfeit the game.

What is the best advice you have ever heard?
“Plan your flight and fly your plan.”

What are you reading now?
President Kennedy: Profile of Power by Richard Reeves. A couple three years ago, I gave myself an assignment to read a biography of each U.S. President in chronological order and I’ve made it to JFK so far. It’s pretty interesting how the more things change, the more they stay the same. I’m also reading The Moondust Sonatas: Movement No. 1, A Hunters Moon by Alan Osi, who is a fellow member of the Cleveland Writer’s Group. It is Alan’s first novel and the first book published by the Cleveland Writer’s Press, a local startup publishing house.

What’s next for you as a writer?
Up early tomorrow morning to scribble some more.

If you were going to be stranded on a desert island and allowed to take 3 or 4 books with you what books would you bring?
Catch-22, Huckleberry Finn, The Collected Works of William Shakespeare and The Bible