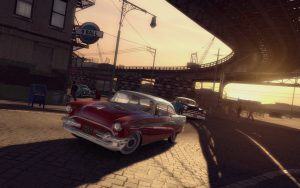 About MAFIA 2 BY 2K GAMES

Mafia 2 is an action game developed by 2k-czech and published by 2k games in august 2010.It was released in different platforms This game is the sequel to 2002 mafia.

Empire Bay, a fictional city based on New York City, Chicago, San Francisco, Los Angeles, Boston, and Detroit, is set in the 1940s–early 1950s. The game includes 50 vehicles as well as licenced music from the time period. Vehicles behave differently depending on the weather during the game. For example, during the early stages of winter, vehicles are more likely to slip on the ice. one of the best games under 10gb.

Author Bio:
2K Games, based in Novato, California, is an American video game publisher. Take-Two Interactive launched the 2K Games and 2K Sports labels in January 2005, following Take-Two Interactive’s acquisition of Visual Concepts the same month. It was founded in New York City and relocated to Novato in 2007. In September 2007, a third label, 2K Play, was added. David Ismailer is the president of 2K, and Phil Dixon is the Ceo. Petaluma,  2K motion capture studio is located in california