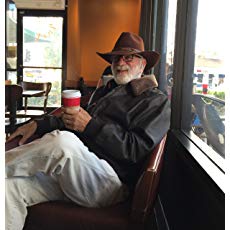 Tell us about yourself and how many books you have written.
I am a deep thinker. Long ago I learned that my thoughts produce the experiences of my life. I began to write about this with my first book, Thought Into Form, continued with another called 360 Degrees of Good, and then took to writing a novel about the energy crisis which featured Nikolai Tesla in a cameo role in Reach For The Sky. I have written a total of seven books, Bahir Revealed, Tikkunei Zohar revealed, and Zohar Chadash Revealed all explaining the deep mysteries of Kabbalah. I have also written a fun novel called Shoe.

My greatest love is my music, I play guitar and sing and perform for senior citizens. My repertoire is vast I like a lot of different kinds of music.

What is the name of your latest book and what inspired it?
Zohar Chadash Revealed is the name of my last work. It is both a translation and commentary of an ancient Kabbalistic text in which I describe and do commentaries to shed light on the code of Torah wherein it is consciousness that is being spoken of throughout. It is the third of my revealed series, (Bahir Revealed, Tikkunei Zohar Revealed) coming previously. The inspiration is to share the secret knowledge of Torah in today’s language and mindset.

Do you have any unusual writing habits?
I tend to write in spurts realizing that keeping at it each day brings a whole lot of writing at the end of the year.

What authors, or books have influenced you?
Torah, Science of Mind, Zohar, Patanjali, Hemingway, Emerson.

What are you working on now?
The second part of of Zohar Chadash Revealed.

What is your best method or website when it comes to promoting your books?
I am still working on that aspect now.

Do you have any advice for new authors?
Keep at it. Time is on your side. Complete the work each day and then come back to it.

What is the best advice you have ever heard?
See yourself through and then become the thing you see.

What are you reading now?
Too busy writing to read much. Writing books and songs.

What’s next for you as a writer?
I have a Fantasy novel called the Roilnork Saga that I’ve been working on and off on. Over five hundred pages to date. Looking to complete that.

If you were going to be stranded on a desert island and allowed to take 3 or 4 books with you what books would you bring?
Torah, Science of Mind, A book of jokes,