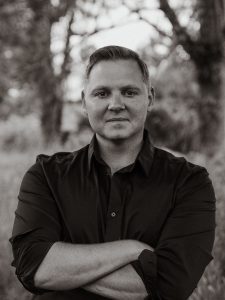 Tell us about yourself and how many books you have written.
I’ve only penned Beneath the Veil, but I am currently about one third of the way through the first draft of the sequel, the Sands of Ahkirah.

What is the name of your latest book and what inspired it?
Beneath the Veil was inspired by a drive over the dilapidated Newburgh-Beacon Bridge. I was stuck in traffic and looked over to see the distance to the water. The thought crossed my mind – “If we go into that, how many of us would come out?”

This was no doubt seeded by watching the old psychological horror movie, The Mothman Prophesies. Add two decades of voracious reading and the simple dream of always wanting to be a writer and there you have it.

Beneath the Veil is riddled with theology and mythology as well, which have been a love of mine since I was very young.

Do you have any unusual writing habits?
Not that I’d consider unusual, but I do blast a playlist of about 50 songs to drown out the white noise in my head as I write. Often times I’ll hear a song come on again and wonder if it was the third or fourth time I’ve heard it. A glance at the clock will show me I need to wrap up for the day job at that point.

What authors, or books have influenced you?
So very very many – I began reading old Koontz… the dark stuff and segued to Crichton in the fourth grade. It became a race at that point to read all that both had to offer and I took a long break during college to become immersed by the foundational writers. When I came back for air, I leaned heavily into King and Straub–then to Langan, Barron, Burke, Ligotti, Files, and now Ballingrud. They are simply outstanding contemporary horror writers. Gaiman is leading me down the fantasy path and would most likely be the one I’d be compared to based on story style and content, but I think I’ve been affected by all of them in some way or another.

What are you working on now?
I am actively writing the second book in The Valor of Valhalla series, The Sands of Ahkirah, but I’m also beginning a few short stories for a companion collection themed around the events that transpire while the children of Lilith are free to roam the world of the living in Beneath the Veil.

What is your best method or website when it comes to promoting your books?
THAT is a good question. I don’t know.

I’d love to have access to all the tools and hit conventions, brick and mortar stores, and etc, but I’m just getting my feet wet. I dedicate a lot of my mental capacity (and health) to teaching at an alternative high school, and I have two boys, Daniel (3) and Charles (nearly 2), so they eat up a lot of time I would be marketing. The boys get a free pass, though. They’re cute and they fill me with ideas.

Do you have any advice for new authors?
Don’t. Stop. Writing.

What is the best advice you have ever heard?
“None of that shit matters. Just write it.”

What are you reading now?
I am currently reading “The End of the World” anthology of short stories.

What’s next for you as a writer?
As a whole? grinding until I can extend my reach as an author.

Specifically, I will finish this series before 2023 (that’s the goal anyway) and move on to a few projects that have been sleeping in my brain for the last year or so.

I would like to join up with a friend and create a graphic novel version of this series as well. He’s a talented guy and I’m one willing illustrator short of bullying him into it.

If you were going to be stranded on a desert island and allowed to take 3 or 4 books with you what books would you bring?
Salem’s Lot, Floating Dragon, The Beautiful Thing That Awaits Us All, Blood Meridian, and The Gospel of Thomas. I’m not particularly religious, so to speak–not these days anyway, but I find that book comforting when little else is willing to lend any.