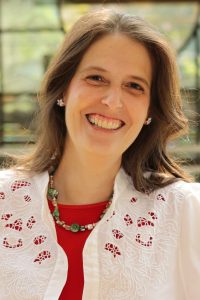 Tell us about yourself and how many books you have written.
M.C. Lee told stories for most of her life, but never took them seriously until her daughter asked her to write a particular one. The plotted six chapters grew to an entire novel, and now a series is in progress.

Currently, she writes young adult fantasy as Marty C. Lee. Her future adult fiction will be under M. Cate Lee.

Her characters take over her brain on a regular basis. If you catch her muttering to thin air, she’s probably arguing with one of her characters. She has learned to keep a notebook by her bed to jot down ideas so she can go to sleep and deal with them in the morning.

In between writing and spending time with her family, she reads, embroiders, gardens, and teaches small children at church. She prefers walking over bicycles or cars, because her feet are less scary. (If she walks, she can read at the same time, which is a nice bonus.)

What is the name of your latest book and what inspired it?
Unexpected Tales is a small short story collection I created to introduce my world of Kaiatan. There’s one story for each country/race, starring minor characters from my main series, Unexpected Heroes.

Do you have any unusual writing habits?
No? What counts as unusual in the odd world of writing?

What authors, or books have influenced you?
Oh, so many. I read a lot. I mean, a lot. I used to read an average of 600 books a year. Children slowed me down to 400, and writing my own books knocked me down to 200. But people tell me my books remind them of Ranger’s Apprentice and Chronicles of Prydain.

What are you working on now?
Book 4 in the Unexpected Heroes series, as well as more short stories, both “contemporary” to the series and “fairy tales” set in the past.

Do you have any advice for new authors?
Read a lot, write a lot, and learn grammar.

What’s next for you as a writer?
Two books of short stories, including fairy tales rewritten to fit in Kaiatan (currently working on Snow White, and Dick Whittington might be next). I’m also pondering expanding one particular short story to a novel because readers keep asking for more.

If you were going to be stranded on a desert island and allowed to take 3 or 4 books with you what books would you bring?
That’s not fair. That’s really not fair. But if I really have to choose, I’ll bring my scriptures and then write my own stories.