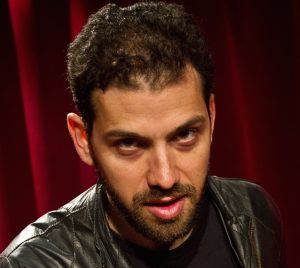 Tell us about yourself and how many books you have written.
I am a writer, actor and comedian. In 2007 I put together a humor chapbook called “From The Fridge To The Crackerjack Box.” It’s short “Shouts and Murmurs” type writing, only not as funny because I wrote it (see self-deprecation in the dictionary). It’s now available on Amazon. More recently, a few weeks ago, a book of poetry was released through Burning Flower Press on Amazon, many of the poems previously published, called “Butterflies Lost Within The Crooked Moonlight.” So I guess you could say two books that have been released to the public. But I probably have about fifteen other projects in transit.

What is the name of your latest book and what inspired it?
“Butterflies Lost Within The Crooked Moonlight.” Was I inspired by butterflies? Negative. Butterflies are alluring, don’t get me wrong. But, of course, they are used as a metaphor. I think beauty is drawn to darkness; even the most delicate and wondrous creatures attracted to mischief; and, of course, because of the brevity of time, we are all headed in a rather dire direction. A lot of the poems are about mortality and existential quandaries, mortal judgment, heavy themes but presented in a light, accessible fashion. Plus, there are funnier poems, lighter poems, quirky poems, lyric poems. I guess I get inspired by almost anything. I could write a poem about the universe or a paper clip. Both are equally valid subjects. Incidentally, I intend to write a personalized poem about any topic of the reader’s choice if they buy my book (just email me your receipt of purchase and the poem will be on the way).

Do you have any unusual writing habits?
I write anywhere and everywhere. On the subway, in crowded delis, on a park bench. I don’t care. I get compelled. Sometimes people look at me like I’m a freak. I think that adds to the enjoyment of the process: “Great. I’m a freak! Move along! I got to finish this goddamn thought man!”

What authors, or books have influenced you?
Let’s stick to poetry since that is my latest book. William Blake and Emily Dickinson are the two most noteworthy influences on my poetry. I love poetry that seems very simple, but actually says a great deal more than is immediately apparent. That makes you want to reread it and discover more, but that is accessible and direct. Also, I like wild metaphors and linguistic playfulness. When language gets up and soars. Nothing better than taking the reader on a vertiginous linguistic journey. I memorized a lot of William Blake’s poems when a kid. And different poems speak to me at different times. Like right now I’ve been returning to “Ah! Sunflower,” which is a poem that has a lot more depth to it than at first is apparent. A great poem…that speaks to you…almost from the grave. You can reread it again and again and always find more in it.

What are you working on now?
I’m working on another humor collection. It’s still untitled. It’s going to be about 18 humor pieces. I think it is a big step up from my 2007 humor collection. Some of the pieces in this new collection were published. You can find them on my website, mattnagin.com. I’m excited to put a new humor book out as I do standup comedy, and it would be nice to have a more recent product to sell or distribute to those who like my style of humor.

What is your best method or website when it comes to promoting your books?
I’m new at promoting books. But I’d say a combination of different techniques work. I use social media–Twitter and Instagram. I think people are supportive on those sites and will share your post about your work. This is nice. It helps. Also, just word of mouth, as I know a ton of people in the entertainment industry or otherwise, just from living in NY for a long time.

Do you have any advice for new authors?
Just keep on writing. Over time you get better. It’s that simple. Also, complete projects and put them out. That was a problem I struggled with for a while. I didn’t finish anything. I was too perfectionistic. I think putting yourself out there as much as possible is really helpful in terms of building confidence and learning to take the slings and arrows that invariably come when people react negatively to your work.

What is the best advice you have ever heard?
All advice is sh*t. That is probably the best advice I ever got. Legitimately. There is a great deal of truth to this simple notion. I think the best lessons I’ve learned were gained through experience or my own self-exploration. Each of us has to carve our own path. I learned to do so on my own terms–and it was not something anyone could teach me. So the best advice I ever learned is not to take advice. Trust your instincts. Learn from your mistakes. And keep plugging away.

What are you reading now?
I’ve been reading a Denis Johnson book called “Nobody Move.” He died recently. I liked when he gets very poetic and lyrical and yet remains grounded in the brutality of an often seedy underworld. Also, he is excellent with dialogue and being as minimalistic as possible. Before that I was reading some Bukowski short stories that I’d never come across that were terrifically ruthless. I’m also reading this novel called Barney, by Guy Sigley. I found it randomly online and it’s amusing.

What’s next for you as a writer?
To complete this humor book I mentioned. Then I want to complete a novel I’ve had on my desk for around a decade. I’m excited to kick it up a notch and get more writing out into the universe. Just completing projects and putting them out to me is like nirvana. Nothing better. If people like it, even better, but the creation process itself-that’s where it’s at.

If you were going to be stranded on a desert island and allowed to take 3 or 4 books with you what books would you bring?
Gulliver’s Travels. Thus Spoke Zarathustra. Ham On Rye. Songs of Innocence and Experience.