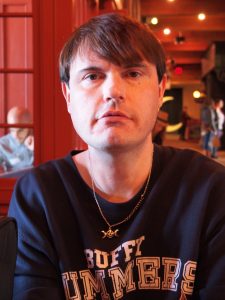 Tell us about yourself and how many books you have written.
My pen name is Michael Beaulieu, though my actual last name is McCarthy. Beaulieu is a name that was in my family for several generations but then people kept having daughters and eventually there were no males left to carry on the name. So, using it as my pen name is my little way of bringing it back. I’ve written four books so far. Well, four that I count. The first is my current release, Reckoning Daze. Soon I’ll be releasing the young adult, urban fantasy novel Book of Shadows, the first book in a series of the same name that I’m doing about teenage witches. I’ve already completed the second Book of Shadows novel and I also have a memoir in the can called Fear & Self-Loathing in Los Angeles. Aside from writing books, I’ve also written 30 original screenplays, some of which I’ll someday make as independent movies. Others will be use as outlines for future novels.

What is the name of your latest book and what inspired it?
It’s called Reckoning Daze and it’s about an anorexic actress who’s full of secrets. You could say she’s so full of them that she’s overflowing with secrets. It was inspired by a few different things. The biggest is that I was living in Los Angeles and severely anorexic myself at the time I wrote it. So, I wanted to write a character that I could relate to. It’s also inspired by the woman I was seeing at the time, who was an anorexic actress. Finally, I had a lot of unique thoughts about Los Angeles while I was out there — I’ve since returned to the Boston area — and I wanted a character I could use to turn those thoughts into satire.

Do you have any unusual writing habits?
I do and I don’t. It depends when you ask me. I can go weeks mostly writing during the day, keeping normal “office hours,” but then one night I’m feeling particularly inspired I might pull an all-nighter then wind up with an odd sleeping schedule for a week. I’m bipolar, though, so I need to try to keep things to a strict schedule for the sake of my sanity. Otherwise, I drink coffee in the morning and the Pepsi that’s made with real sugar in the afternoon. I usually don’t eat anything in the morning or during the day, choosing to wait and eat after my writing for the day is done. Where hunger would make some people cranky, I find that not eating when I’m writing keeps me on an even keel. I don’t experience hunger the way most people do though, a leftover effect from when I was anorexic. Instead of irritating me, it tends to have a calming effect.

What authors, or books have influenced you?
The biggest author who’s influenced me is Francesca Lia Block. At the time I wrote Reckoning Daze, I found great comfort in her eating disordered characters in her novels Violet & Claire and The Hanged Man. Those books also showed me that a novel didn’t have to be 100,000 words. One of the things I love about her work is how she chooses her words so careful, saying with 10 words what other writers might need 50 to say. I’m also a big fan of Bret Easton Ellis and like to think of Reckoning Daze as my answer to Less Than Zero. Other authors I enjoy include Augusten Burroughs, Chuck Palahniuk, Elizabeth Wurtzel, Peter Hedges and Jack Kerouac.

What are you working on now?
Right now I’m editing Book of Shadows, working closely with a couple of proofreaders. I long for the day when I can just hire a professional editor, but to be entirely honest I’m living well below the poverty line at the moment so those days are not here yet. In any case, I’m very excited about Book of Shadows. As someone who’s a witch, I wanted to tell a tale about teenage witches where the spells are based on actual spells, not purely the stuff of fantasy. Not that there’s anything wrong with pure fantasy. It’s just that there have been hundreds of teenage witch books and movies made over the years and I felt like it was high time somebody do something different. Something more authentic. Something I could show my kids someday.

What is your best method or website when it comes to promoting your books?
I’m still new to the self-publishing game so I can’t really say that I have a best method as of yet. I am taking Mark Dawson’s Self-Publishing 101 course, however, and am always trying his suggestions. My current plan is to have my book Reckoning Daze in several book newsletters on the same day in hopes that it will become a best-seller for the day in at least one category and move some units. Plus, it’s any author’s dream to be able to brag that they’re a best-selling author, so accomplishing that would be sweet, too.

Do you have any advice for new authors?
I’ve found that reading writing memoirs like Stephen King’s On Writing and Anne Lamott’s Bird by Bird have helped me more than anything else. I do like reading writing advice, but hearing it from authors I’m a fan of always makes it much more inspiring than advice churned out by some guy who couldn’t get his owned work published so now he’s trying to make a buck off of other writers. Most writers could pen a how-to book but that doesn’t mean that most of them would be worthy of your time, much less your consideration.

What is the best advice you have ever heard?
That’s a question I’m always asking people on my music and pop culture site, Love is Pop. What’s the best advice they’ve been given and who gave it to them. I’m always surprised when people can so easily answer that one because I’m not sure that any one piece of advice I’ve ever been given has stuck with me over the years, much less who gave it to me. But when it comes to writing, I think Stephen King’s On Writing was probably the best advice book I’ve read. I’ve also found meeting authors like Francesca Lia Block, Peter Hedges, David Mamet, Oliver Stone and others to be very inspiring.

What are you reading now?
I’m reading The Clearwater Witches series by Madeline Freeman, a self-published author I interviewed on Love is Pop recently. I just finished reading The Girls, which I thought was pretty mediocre in spite of all the accolades it’s been getting. I’m still reading The Goldfinch by Donna Tartt. That one seems to be taking me forever, but it’s a long book and I can only take so much of it a day, partially because I’m trying to savor it and partially because it doesn’t move fast enough to hold my attention for more than ten pages a day. I’m also reading I also enjoy reading the features in NYLON magazine every month. I know it’s for girls, but they never fail to put someone I’m fascinated with on the cover and their feature interviews rock.

What’s next for you as a writer?
Book of Shadows. I’m really excited about getting that out into the world during the next few months. With Reckoning Daze, I’d written the book ten years ago and only recently did some revisions. But they weren’t lengthy revisions. So, it already felt like a case of been there, done that before I even scheduled its release. That’s why I put it out first, I suppose, just to get the process of releasing it done and over with. Don’t get me wrong — I love it and feel that it’s some of my best writing. But it hasn’t felt new to me in a long time. Book of Shadows, however, does still feel new and exciting. Even though I’ve ate, breathed and slept with it for the past couple of years, it’s my baby and I’m going to really enjoy putting that one out there. As a young adult series title, I think it has the potential to sell much better than Reckoning Daze, which is something of an awkward, niche book that you probably need to have some experience with anorexia with to fully appreciate it. Just about any teenager on the planet should find something to like about Book of Shadows, though I do realize it will probably find more female fans than male for the simple reason that the three main characters are a trio of female friends.

If you were going to be stranded on a desert island and allowed to take 3 or 4 books with you what books would you bring?
If the island was going to have electricity, I’d bring my Kindle, which currently has 292 books on it. But for purposes of this interview, I’ll bite. First, I’d take What’s Eating Gilbert Grape by Peter Hedges. Gilbert Grape, who was played by Johnny Depp in the movie, is a strong, male literary character who experiences a sort of isolation and depression I related to when it came out and still do to a lesser extent. I’d also take Running with Scissors by Augusten Burroughs because the fact that he survived that reminds me of how strong the human spirit can be and it’s also laugh out loud funny. By Francesca Lia Block I would bring The Elementals because it’s one of her longer works and would give me more hours of entertainment than some of my shorter favorites of hers. With Bret Easton Ellis, I would bring Glamorama if we were leaving right now, but on another day it could just as easily be American Psycho.