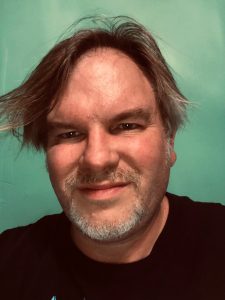 Tell us about yourself and how many books you have written.
Hello Vinny and Awesome Gang! I was born in Virginia and have lived in Rhode Island, North Carolina, and currently, Florida. I have six titles currently on Amazon; two novels, one graphic novel, one film book tutorial, and one other novel under a pen name.

I was a creative writing major in college, although most of my adult life, I have been involved in the film and entertainment world in various roles including screenwriter, actor, acting coach, and independent film director. I once played Cybill Shepherd’s son in an action film titled Hard Luck, in which I also had a fight scene against Wesley Snipes and Mario Van Peebles. I also have a fun bar scene with Meryl Streep and Elisabeth Shue in Hope Springs.

During the pandemic, I began to adapt some of my better screenplays into novels with the idea that this would be a great way to get my work read by more people.

What is the name of your latest book and what inspired it?
Fight or Play Basketball: every shot counts is a coming-of-age sports novel about Jack Scratch, a high school senior with possibilities for a college scholarship for basketball. Through a turn of events involving his single mom Janet, Jack gets caught up in the world of boxing. Jack begins to favor the individual nature of boxing over the team aspects of basketball, which is the conflict that leads us to the book’s title.

I started writing this story as a screenplay in 2012. At the time, I was inspired to write my own “sequel” to the Rocky movies (this was before Creed was released). After writing a few pages, I called Stallone’s management and asked them whenever I was to finish my proposed “Rocky Seven” script if anyone on their end would actually read it. They told me that unless I had financing in place already, this was unlikely to happen.

I am grateful for their honesty as it saved me a lot of time. Still wanting to write my own sports story, I changed the “Rocky” character to “Sweet” Sugar Brown and Rocky’s Philadelphia became Fight or Play Basketball’s Providence (Rhode Island). Within a few months, I had written the first draft of the screenplay, which was well received by a writer’s group I was in at the time (Carl Dupre, writer of Detroit Rock City, was also in the group.) Eventually, the screenplay won a few awards, including The Rhode Island International Film Festival’s Spotlight on New England First Prize Award.

Flash forward to 2022, when I adapted the screenplay into novel form. Now that I’ve done so, I have to go back and rewrite the screenplay again, as I have discovered even more layers by writing the story as a novel!

Do you have any unusual writing habits?
I prefer typing over longhand. I often write while in coffee houses or restaurants as the background noise helps me to focus somehow.

What authors, or books have influenced you?
Laurence G. Boldt has written several books that I enjoy, including Zen and the Art of Making a Living.
Muscle: Confessions of an Unlikely Bodybuilder by Samuel Wilson Fussell is another favorite.

What are you working on now?
I’ll be filming “Many Keys – The Heartbreak monologue” as a proof-of-concept video for my A Distance from Avalon series this August. I will then enter the finished piece into film festivals and eventually upload it to “Subscribe to Mike Messier YouTube Channel” (yes, that’s the name of the channel). I put a lot of time into my YouTube Channel and most of my film and video work can be enjoyed right there for free!

What is your best method or website when it comes to promoting your books?
I’m really just getting started with promoting my books. Awesome Gang is the first website I’ve worked with beyond my own www.mikemessier.com

Do you have any advice for new authors?
For promotion and marketing, the resources I’ve used so far include the “Self Publishing with Dale” YouTube Channel and the Publisher Rocket app. I just listened to the audio version of
Self-Publishing Secrets by Keith Everett, which I found to be very helpful.
As far as actually writing goes, I had some fun writing with the episodic Amazon Kindle Vella system before adapting my Vella stories to the traditional formats.

What is the best advice you have ever heard?
“Never refuse a gift” and “never throw away anything you write.”

What are you reading now?
I just finished the audio version of “Still Foolin’ Em” by Billy Crystal which was very endearing. I just bought a copy of A Catcher in the Rye which I haven’t read since my freshman year in college. I’ve been ordering some comic books from eBay of titles that I enjoyed as a kid.

If you were going to be stranded on a desert island and allowed to take 3 or 4 books with you what books would you bring?
The aforementioned Zen and the Art of Making a Living. How to Survive on a Deserted Island Picture Book by Samantha Bell would probably be good for the adventure!