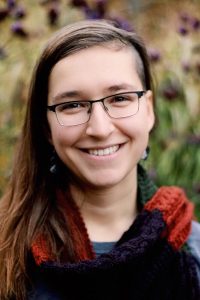 Tell us about yourself and how many books you have written.
Let’s see… three fun facts about me: I’m 21, I’m a blacksmith, and I’ve lived on three continents (North America, Europe, Asia). I’m in the process of publishing my first book, Brightshade, and I’m just about finished writing the second book in the series.

What is the name of your latest book and what inspired it?
My debut novel, Brightshade, is the product of five years’ worldbuilding, planning, and writing. I’ve loved reading fantasy since I was young and soon realized that I was pretty good at writing too. It seemed natural to put these two interests together and write my own book. As for what inspired Brightshade specifically: I wanted to explore what it means for a single person to be able to shape history and make a difference. Each of my characters struggles with the knowledge of their own agency and sense of choice. I think that’s something we all go through at different stages in our lives, especially as we’re growing up.

Do you have any unusual writing habits?
Not really. I’m an outliner, so I usually brainstorm my plot, write a few snippets, and then compile a grand excel spreadsheet with all my chapters and scenes. However, I don’t always write in order… sometimes there’s a juicy scene I just can’t wait to get to. For example, I’ve already written the ending to my four-book series Tales of Aether and Soul, even though I’m only just finishing book two.

Oh yes, and when I challenge myself to write every day, I’ll often reward myself with chocolate. I guess that counts as unusual?

What authors, or books have influenced you?
I’ve been influenced by my favourite fantasy authors, such as Rowling, Riordan, and Sanderson. Sanderson especially challenged me to think critically about what magic would look like in a world of my own creation.

However, my biggest influence has undoubtedly been Tamora Pierce. I still remember picking up First Test and discovering a whole new genre of epic proportions that felt wonderfully familiar after all my experiences growing up in the different cultures of Austria, Romania, the Philippines, and Canada. Pierce’s characters, from Lady Alanna, to Keladry of Mindelan, Daine Sarrasri, and Aly felt both realistic and surreal. They reminded me that it’s okay for girls to be in charge of their own destinies and inspired me to write about women just as different, strong, and wonderful as they are.

What are you working on now?
I’m working on the second book in the Tales of Aether and Soul series, as well as my first standalone novel. In it, a vegetarian and an asthmatic band together to escape their extreme poverty in a world in which magical power can be gained by abstinence from certain foods.

What is your best method or website when it comes to promoting your books?
I’m still new at this! So far, I’ve been building up a newsletter and keeping my readers informed through Facebook and Instagram. I try to offer value beyond mere book promotion, so I’ll often feature other indie authors, free books, or fantasy memes.
If you’d like to take a look:
FB: https://www.facebook.com/artbymrd/
Insta: https://www.instagram.com/artbymrd/

Do you have any advice for new authors?
Don’t be afraid to start writing. Planning can be a good thing, but sometimes it can hinder you from actually sitting down and getting words on a page. Your book will morph and change as your write, and that’s okay! It’s part of the wonder of writing: you’ll discover new plots, characters, and twists along the way. As Dory from Finding Nemo would say: “Just keep swimming.” (And by that I mean, just keep writing.)

What is the best advice you have ever heard?
Write every day. Seriously, this just WORKS. I participated in my very first Nanowrimo this November (a challenge where you try to write 50,000 words in one month), and writing every day allowed me to complete 56,000 words on my very first try. I was shocked at how easy it became once I got into the habit of it.

What are you reading now?
A very boring textbook on theatre in the middle ages (thanks, university). Mandatory reading aside, I’m on my second read-through of The Gods of Men by Barbara Kloss, an epic fantasy that I highly recommend to anyone who needs a new book to read. I’ve also just started a play called “What Glorious Times They Had.” It’s about Nellie McClung and several other suffragettes who were instrumental in the struggle to allow women to vote in Manitoba.

What’s next for you as a writer?
Well, surviving my first publishing is the priority at the moment. I’m also hoping to finish book two within the next two weeks. After that, I’ll start editing book two, writing book three, and, oh yes, somehow I need to survive another semester of full-time studies in theatre…

If you were going to be stranded on a desert island and allowed to take 3 or 4 books with you what books would you bring?
Hmm okay. Tamora Pierce’s Trickster’s Queen, the Bible (NIV, in case you’re wondering), and The Name of the Wind by Patrick Rothfuss, which I’ve always wanted to read but have never quite gotten to.