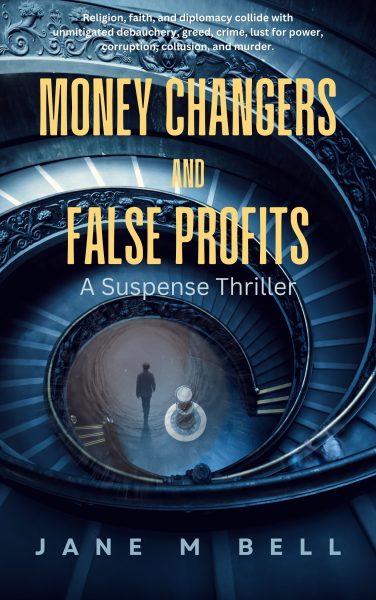 the one thing the detective hated more than anything else was a liar,

especially among his colleagues.

Yet, here he sat,

on the verge of telling the biggest lie he’d ever told in his life.

Lying to the D.A. was, in his mind, a horrible situation.

Dragging his supervisor into this deception was even worse…”

“Money Changers and False Profits” is a fast-paced, action-packed thriller that takes you on a journey through the seedy underbelly of 1970s New York City. Follow the story of seasoned NYPD detective, Francis Clavering as he delves deeper into the world of organized crime, uncovering a shocking alliance between the Vatican Bank and the American and Italian Mafia. This historical novel is based on true events, and exposes the greed, corruption, and murder that lies at the heart of this unholy alliance.

As the Detective Clavering travels from New York to Germany, Italy, and beyond, he uncovers a web of lies, deceit, and deadly collusion that threatens to shake the foundations of the Catholic Church and the American government. This gripping story will keep you on the edge of your seat as you follow the detective’s desperate efforts to bring the criminals to justice.

With its richly drawn characters and expertly crafted plot, “Money Changers and False Profits” is a must-read for fans of true crime and suspense novels. Don’t miss out on this thrilling journey through the dark side of religion, power and greed. Order your paperback copy now, or add this new release from December 2022 to your Kindle Unlimited thrillers library list and experience the thrill of the chase!

Get This Thriller Book.

Maybe it was inevitable that I became a writer. Growing up, the constant tap tap tap ding of my grandmother’s manual typewriter surrounded me as she constantly worked on a myriad of writing projects. I grew up just south of Modesto, California, and graduated from Ceres High School. My College career began at Modesto Junior College, where I developed an interest in psychology and began working in a locked mental facility. In 1988 I began my 20 year career with the United States Army Reserves where I served as an Armorer, Drill Sergeant, and Combat Medic Instructor. After earning my AA from Modesto Junior College, I completed my four-year degree at Sonoma State University where I earned my BA in Psychology with Distinction, and did Post-Graduate studies in Neurobiology. For postgraduate work I divided my time between Sonoma State University and the San Francisco VA Medical Center at Ft Miley where I worked in a schizophrenia research lab. Following my graduate work, I worked in the medical field as an Obstetrics Technician at a local hospital. Today I make my home just outside of Modesto, California with my two sons, daughter, two dogs and a cat. In my spare time, I serve as a docent at Columbia State Historic Park in the Sierra foothills east of Modesto, and I am a proud member of the Columbia Gold Diggers Granny Basketball Team.