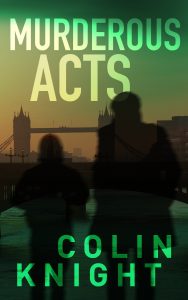 FREE ONLY ON SEPT 24 ON AMAZON

A delusional actor, with an incurable social disease, uses his acting skills to murderer ‘unworthy’ people for an imaginary audience until the child of the women he loves discovers his secret.

A page-turning psychological story that will have you watching what you say and looking over your shoulder.

Author Bio:
Colin Knight was born in Manchester, England to working class parents – his father painted houses and drove delivery trucks; his mother worked in a retirement home. He and his four siblings shared a small three-bedroom house on an unremarkable city owned housing estate ten miles from the city center. From seven to sixteen years old, he held newspaper and milk delivery jobs, which he did, before school.

Educated to state standards, at an experimental public high school for boys, Colin graduated at sixteen with minimum credentials. At eighteen, he joined an American international company as a general office helper. By twenty-three Colin had developed an aptitude for product management and marketing. His career with the American company provided work assignments in Italy and Switzerland, as well as travel to many European countries.

In 1987, Colin immigrated to Canada to work for a distributor of the American company. In 1991, he took a chance and quit work to attend university. By 1997, Colin had obtained a BA Honors Degree in Political Science, and a MA Degree in International Relations.

In 1999, after a brief return to the private sector, Colin joined the Canadian Federal Government. During his fifteen-year government career, Colin worked for the Department of Foreign Affairs, the Canadian International Development Agency, the Public Safety Department, the Royal Canadian Mounted Police, and most recently, he was a Senior Policy Analyst in the Federal Privy Council Office. Government work and assignments took Colin to Europe, Asia, Latin America and the US. Colin retired from the government in 2014 to focus on family, writing and life.