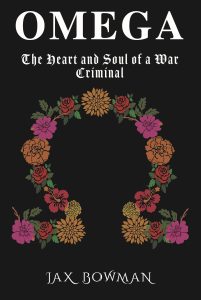 About Omega: The Heart and Soul of a War Criminal

The Young Captain Carter leads Omega Squad, a band of British, Special Forces soldiers who are known to teeter between legal and illegal warfare. Omega Squad come face to face with the eccentric and mad, Tarmo Skenev, an arms dealer who has taken former Omega Squad member, turned undercover operative, Riley, prisoner. Just when they believe their mission is over, Omega realise it is only the beginning. As the fight gets bloodier and enemy ties deepen, each member of Omega must face their own demons, coming face to face with their mental health.

Who should read this book? Fans of gripping action, heroes to back to the very end and villains to despise. Junkies of thriller, who have no clue what to expect next, the twist in this tale is harsh and lethal.

The story is not just another epic action series, it comes with an embedded message of mental health.
One of our heroes from Omega Squad, Reed, is an amazing soldier, his skill eclipses all others, yet he is haunted by his past, a tragic accident is relived over and over.

Shift, another member of the squad, battles his dissociative identity disorder. In the story, we find out how one particular song turns him into an unhinged, animalistic mad man.

Romance is also a key part of this story, a story of love, its trials and tribulations. How even in a world of war and terror, love flourishes and its stubbornness to die. We see both sides of it. A beautiful moment when two souls, destined for one another, finally come face to face, against all odds. Also, the darker side of love. The obsessiveness of it. How an infatuation can blind you and lead you down a path you would not willingly choose to follow.

This story will beg its reader to ask themselves, ‘what would I have done in that situation?’.

Omega: The Heart and Soul of a War Criminal is an epic story that features, thought-provoking dialogue, a promise of realism and shines a light on the delicate nature of mental health.

Author Bio:
A twenty-something-year-old relentlessly chasing the dream to create a piece of fiction that does more than tell a story.

I first discovered my love for writing during my last year of college, where I studied Creative Media Production, a course I had fallen out of love with. Until I found screenwriting. It was my saving grace and gave me a new-found desire to continue with my college education. I have written a mockumentary/comedy script and an action screenplay. ‘Omega: The Heart and Soul of a War Criminal’ is an adaptation of that same action screenplay. I have spent over a year transforming this humble screenplay into an epic story, which features, thought-provoking dialogue. Characters to fall in love with, and those to despise. A promise of realism. And a shining light on mental health.