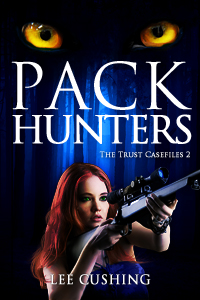 About Pack Hunters by Lee Cushing

Catherine Jordan is an operative for a secret organisation that hunts down evil. Her next mission far outweighs any other she has ever experienced, this time the risks are personal – they involve her girlfriend Daphne, who has gone missing when a plane is hijacked, a beastly tropical island and a deadly lottery where nobody wins, nobody human anyhow.

This Pop Culture Horror story is not based on medieval folklore or Germanic pagan times, it is a modern day thriller with elements of American Werewolf in London, the series Lost and Hunger Games. The phenomenon of lycanthropy activity is rampant. The shape-shifters heavily populate a deserted tropical island, surviving, thriving, hunting and devouring anything that breathes….they are ravenous, craving human flesh!

Catherine is not fooled by the illusions of a stunning yet dangerous tropical island, that masks a breeding ground for the pack to launch from. From there they are sprawled throughout our cities as humans morphing into wolves, whenever the need arises with howling successes. Her desperate efforts to rescue Daphne in time are driven by their love for one another, but are all her attempts futile? And who, if anybody, survives the beautiful island’s morbid, evil, blood-soaked environment?

Author Bio:
Lee Cushing is a paranormal thriller author and a lifelong fan of the occult. Having become obsessed with supernatural folklore and the world of horror from an early age, Lee has spent years studying tales of the occult and immersing himself in stories of otherworldly phenomenon. He’s also the owner of a number of vampire and horror-related groups in Facebook, where fellow fans of the supernatural come together to celebrate and discuss all things paranormal.

His debut novel, Voodoo Mambo, blends high-stakes action and shadowy agencies with a dark underworld of demonic creatures and their insidious plots to attack humanity. Lee draws his inspiration from classic horror movies – including Hammer and Universal – as well as beloved TV shows including Doctor Who, Supernatural, The Avengers, and Buffy The Vampire Slayer.