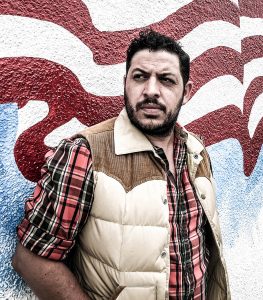 Tell us about yourself and how many books you have written.
Living on the coast definitely has its perks. Moving to Corpus Christi with the beach just a few minutes away has lead me to start writing professionally for a few years and submitting short stories and novels for publication. I currently have two short stories in two anthologies and am gearing up to release two novellas back-to-back this month and next.

What is the name of your latest book and what inspired it?
“I Wear My Sunglasses at Night” is the latest book that was, of course, inspired by the Corey Hart’s song of the same name. When I was a kid I just always thought it was about vampires, so a few years back I attempted to make my idea into a short film but couldn’t get funding. Then, after reading multiple bad vampire stories, I decided I should take a whack at it. Hopefully mine’s not added to someone else’s bad list.

Do you have any unusual writing habits?
The only thing that’s slightly unusual is I listen to music which has inspired scenes or plot changes a few times. I make sure to never listen to the same bands or singers once I complete a book, unless it’s a sequel.

What authors, or books have influenced you?
Stephen King and Ray Bradbury were the first. I think I read King’s “Night Shift” when I was 9 or 10 and it scared the bejesus out of me. I’ll read anything really, as long as it has a nice book cover (I do judge a book by its cover).

What are you working on now?
I’ll be releasing the next novella, “Once Upon a Time in Rehab”, in November as well as attending several launch parties for my other works. I’ll also be working on two sequels to “Sunglasses” that will be released really next year.

What is your best method or website when it comes to promoting your books?
I haven’t figured that out yet.

Do you have any advice for new authors?
Write. Authors are a procrastinating bunch and the world is full of them.

What is the best advice you have ever heard?
I met David Morrell, author of “First Blood” at a book signing once and he said “The only way you’re ever going to be a writer is if you write something.” So I did. A lot of things.

What are you reading now?
Old paperback horror books.

What’s next for you as a writer?
I’m just going to keep on writing and promoting myself.

If you were going to be stranded on a desert island and allowed to take 3 or 4 books with you what books would you bring?
The Stand, A Scanner Darkly, The Martian Chronicles, Pride and Prejudice