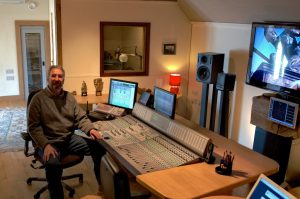 Tell us about yourself and how many books you have written.
Having worked with a galaxy of stars from Ronnie Barker to James Burke – Rick Stein to John Pilger – Spike Milligan to Monty Python and mixed many classic comedy shows including: The Two Ronnies, The Goodies, Only Fools and Horses, Spike Milligan’s Q9, Open All Hours and To The Manor Born as well as loads of major TV dramas, animations, documentaries, and having picked up BAFTA and RTS awards on the way – Paul decided to write a book. It made him laugh and enjoy the adventure – so take a look into a very silly mind and enjoy reading it too.

What is the name of your latest book and what inspired it?
Two’s Company – Four’s Better: Is the story of two men, two (talking) dogs and their cruel and long journey that will finally lead the four companions to a heartbreaking end to their quest. This is a true fable with the breadth and sweep of a dead dog’s tail that was inspired by the great Terry Pratchett, Tolkien, Douglas Adams, J K Rowling and many wonderful writers of fiction.
Although my book falls short of their genius it was written to make me laugh and as many others as possible.

Do you have any unusual writing habits?
It’s puerile and very silly but is worth reading as one lovely reviewer said….
What can I say? It’s a crazy story; it left me baffled many times. I’m so confused. Eccentric story! Just because it was so strange, it left me laughing. You’ll have to read it for yourself to figure out why I gave it five stars. Maybe even then you won’t figure out why I gave it five stars.
I can’t figure it out myself; I just feel it deserves five stars.

What are you working on now?
My autobiography

What is your best method or website when it comes to promoting your books?
This One and my website www.paulroberts.co.uk

Do you have any advice for new authors?
Enjoy

What is the best advice you have ever heard?
Don’t be frightened of throwing away long sections of your book, even if you’re fond of them, if they don’t really work.

What are you reading now?
Bernard Cornwell’s new book.

What’s next for you as a writer?
Create more sound tracks.

If you were going to be stranded on a desert island and allowed to take 3 or 4 books with you what books would you bring?
I don’t often read a book more than once. So I would choose two Graham Greene books I haven’t read. Lord of the Rings because it’s so wonderfully written and Pears Encyclopaedia.