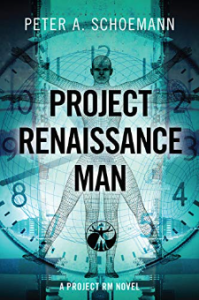 The Storm wiped out billions. To reset humanity’s future, these teens must uncover the truth and risk everything—even humanity’s existence.

17 years after billions were lost, the few hundred remaining live in peace and harmony. Life is especially good for Matthew Cane. His two trusted friends, Rich and Bobby, are more like brothers and his pretty girlfriend, Lori, would do anything for him. For Matthew, everything is neat and in place, the perfect life—well, as perfect as possible growing up without his mother and most of humanity gone.

In one day, however, two women jolt him out of his teen concerns and into something much greater. His deceased mother comes to him with a mission to reset humanity’s future; then an unexpected beauty provides the spark. Will Matt risk everything for the chance to save billions, including his mother?

Author Bio:
Peter A. Schoemann is married to fellow lawyer Christine Eckstein. After living for two years on Capitol Hill in Washington D.C., Christine and Peter moved back to their childhood home of Florida, where they’ve spent the last two decades raising their four wonderful children.

In his spare time, when he’s not helping clients with their businesses or writing, Peter and his family teach taekwondo to children with special needs and enjoy outings to Disney World and Universal.

In case you want to know a little more about me and my inspiration for Project RM, I sent the following to my email list recently:

The Story Behind Project RM and its Author

I’m married to the love of my life-my wife, Christine Eckstein. Together, we’re raising four wonderful children-Kate’, David, Kenny, and Ava. Like any family, we’ve had our challenges. Our boys were diagnosed as autistic at a young age and they and Ava have the same kidney disease that forced my wife, two of her siblings, and their father to get kidney transplants.

We do not view the autism or kidney disease as a negative (although Kenny now experiencing kidney failure presents a new obstacle to overcome). Instead, these challenges have inspired us to help people with disabilities and show what they can do.

In 2011, our family formed Breaking Barriers Martial Arts-a taekwondo school for people with special needs. Since then, eight of our students have earned black belts. While we’re proud of their lofty achievements, it’s been far more rewarding to witness the growth in each of the dozens of students–not only in terms of their physical development, but in terms of their social, intellectual, and leadership development.

Our children continue to amaze us. David is a rising sophomore at the University of North Florida. He is studying to become a writer. Together, he and I wrote the short story Project RM: The Code. In July (now late June), we will launch this sequel to Project RM: Genesis. David and Ava are helping with the writing and many other aspects of Project RM. Kenny is a high school junior who loves digital animation. He’s working on his first cartoons, which are very funny (yes, I’m biased). Our oldest, Katarina, is a rising senior at the University of Florida. She’s the odd one, studying pre-med.

Since the moment I met her, my wife has taught me if you want something go for it. If you’re inspired by something, act on it. This philosophy has served our family well. Acting on inspiration doesn’t ensure success. But you can’t succeed if you don’t act. That’s why, when the inspiration for Project RM struck me, I immediately began writing.

During lunch one day in February 2010, I sat at my desk reading a sports or some other news article. Suddenly, a thought popped into my head. What if an extinction level event were to occur? This is not my regular thought process, but a story began to form. What if in the wake of the Cuban Missile Crisis the government had created a secret society of Renaissance men and women who could maintain civilization if such an event could not be prevented? Without them, any survivors likely would lose many advances we consider essential-power, medicine, food and water distribution, security, etc. They’d be thrown back into the dark ages. A story about the son of two of these RMs flowed through my head. I knew immediately this was a story that had to be written. I’ve taken the last eight years to transform my legal writing into novel writing. Through the ups and downs, I’ve never wavered. This story has to be told.

The story only begins with Project Renaissance Man and Project RM: Genesis, the prequel short story also being released this Monday. We plan to release two more Project RM novels, continuing the coming of age story of Matthew Cane. We also plan to release seven more short stories in the Genesis series. The eight Cold War serials will combine to form the prequel about the beginnings of Project RM.

With three of my children interested in telling stories through books and animation, Project RM has become the launching pad for Eck-Schoe Productions and Publications, LLC. My dream is for Eck-Schoe to be there for them long after I retire.