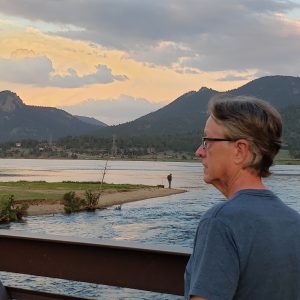 Tell us about yourself and how many books you have written.
After four books in the nonfiction, mental health field I refashioned myself as a novelist in my Hank Anderson Thriller series. My first, the well received Overnight Delivery, was released in 2020. This week I released Book 2, The Mighty Shall Fall.
My mental health work these days is primarily as an educator and writer. I continue to write nonfiction and will have an article published in Coping with Cancer Magazine this fall: Cancer Survivorship and The New Retirement.

What is the name of your latest book and what inspired it?
The Mighty Shall Fall: A Hank Anderson Thriller. The Hank Anderson series was inspired by my desire to create the story of a determined individual whose life mission to help those in need repeatedly collides with his life-long attraction to risk. Having spent my own life living in various Midwestern states, I continued to use Iowa as the central setting for Book 2. The second book was set in motion by my interest in the influence of shadowy groups on vulnerable individuals. Hank is a psychotherapist whose – as my cover endorsement states – “insatiable curiosity, big-heart, and psychological savvy takes him down yet another dark rabbit hole.”
Below is the blurb:
Hank Anderson is stuck in the aftermath of the tragic life of Kenny Jensen when Seth Oberstreet is dropped at the door of Anderson & Greenberg Counseling, hundreds of miles from home. In moments, the speed and trajectory of Hank’s recovery is up for grabs. As Seth’s story unfolds, Hank’s mission to protect the vulnerable collides with his compulsion to solve complex human puzzles. Disoriented, on the edge of collapse, Seth has come under the influence of The Scholars of Calm – a secretive spiritual movement led by self-proclaimed guru, Taranis Tyr.
Why did this sect step out of the shadows now? And why choose Hank?
Hank needs backup. That’s before Seth disappears. Detective Phil Evans answers the call, setting in motion a desperate search that places them all in the sights of those who value death over truth, while forcing Phil to confront his own long-buried trauma.

Do you have any unusual writing habits?
My home backs to a wooded area and creek. I love to write outdoors, allowing myself time to stop, listen to bird calls, and watch the squirrels race around the yard.
There is a great deal of discussion in fiction about working from an outline, or not, when creating a novel. I do not. I start with the characters and a premise. After considerable time I am absolutely convinced that this results in more plot gaps to be filled in future drafts, a greater number of rewrites, and more complex editing. More work. And yet, it has become my style, and comfortable, to have the characters lead me rather than the other way around.
Writing for me is meditative. The outside world goes away; I am engrossed in the characters and entertained by the story. It is in the hours between writing that I touch the hope readers will be engrossed and entertained.

What authors, or books have influenced you?
My dad set in motion my interest in reading mystery and thriller series at an early age. I started with the Hardy Boys and moved to the standards: Agatha Christie, Arthur Conan Doyle, Dashiell Hammett, Raymond Chandler (whose writing inspired part of my pen name). I was an apt reader of O. Henry as an adolescent. His humor, alongside the ironies and pain of daily life, is a significant influence in how I develop my characters and narratives. I re-read the George Chesbro Mongo the Magnificent series to remind me that the rules of writing can be shaped-shifted. His work had aspects of mystery, thriller, horror, fantasy, and genres I’m not even aware of.
I am also deeply influenced by nonfiction authors. Books like Man’s Search for Meaning by Victor Frankl and Angela’s Ashes by Frank McCourt are as riveting as the most important classics in fiction.
For the Hank Anderson series, I was particularly inspired by the autobiographies of Bruce Springsteen and the sadly deceased sax player for his E-Street Band, The Big Man, Clarence Clemons. The energy of their friendship was a catalyst for me to create the relationship between Hank and Detective Phil Evans, key to Book 1 and central to Book 2.

What are you working on now?
In addition to promoting The Mighty Shall Fall, I’m working on Book 3, tentatively titled The Last Step. The core of this story will be the predicament that befalls Hank’s business partner and mentor, Dennis Greenberg, the premier addictions counselor in Des Moines, Iowa. Readers who are familiar with the Twelve Step approach to addiction will find key components of each book in the series that integrate recovery into the narrative, which inspired the title.

What is your best method or website when it comes to promoting your books?
As an indie fiction writer, I have found sites like Awesome Gang to be invaluable in getting the word out to readers. Various Facebook groups that support writers have been another useful resource. I participate in a FB reader’s group, Fiction Fix, that connects me with writers and readers around the U.S. and Great Britain. It’s promotion, encouragement, and fun!

Do you have any advice for new authors?
Ask yourself: Why do I write? My first editor once said, “For a social worker, you’re a good writer.” That was all the encouragement I needed to continue in nonfiction. My love for mystery series was all the push I needed to take the leap into fiction. Publications, royalties, positive reviews are a bonus. They have helped me in the business of writing. They have not made me, or most other writers, best selling authors. I believe everyone is creative. If you like to create with words…Enjoy the Process.

What is the best advice you have ever heard?
A well-known thriller author once finished a seminar I attended with, “I’m glad you came to my presentation today. However, if you’ve been telling yourself you don’t have time to write, you could have stayed home and written today.”

What are you reading now?
Like many avid readers, I often have several books going at the same time, blending nonfiction and fiction.
I’m a big fan of rock music history and am finishing the recent autobiography Time Between: My Life as a Byrd, Burrito Brother, and Beyond by Chris Hillman. Interesting story by an underappreciated musician who has been key to more than one pivotal band. I’ll be opening a Van Morrison biography next.
I regularly read nonfiction articles regarding cancer survivorship and the non-financial aspects of retirement, due to professional interest and teaching.
On the fiction side, I try to stay current with the C.J. Box Joe Pickett, Craig Johnson Longmire, and John Sandford Virgil Flowers series, three of my all-time favorites. As a Midwestern author, I find the authenticity of their rural characters particularly engaging. I’m starting the Sara Johnson Alexa Glock series – intriguing stories, great New Zealand setting. And, because I still love my Sherlock Holmes, I’ve gone back to read Caleb Carr’s 2005 The Italian Secretary.

What’s next for you as a writer?
I’m going to the mountains to hike and relax. Then, several upcoming book signings for The Mighty Shall Fall. My plan is to strike a balance between promotion and continuing to write. I also enjoy the occasional opportunity to be a beta reader for the work of close friends.

If you were going to be stranded on a desert island and allowed to take 3 or 4 books with you what books would you bring?
A Sherlock Holmes anthology
Man’s Search for Meaning
Wilderness Survival for Dummies
A Douglas Adams anthology