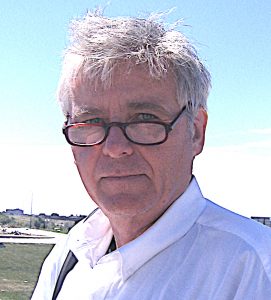 Tell us about yourself and how many books you have written.
I’ve written three novels. The first two were practice. But one of them turned out pretty well, so I went back to rewrite it. It’s very funny. I hope to have it out early in 2020. It’s called At Large. Subtitle: How Not To deal With The Obesity Epidemic. It’s based on a screenplay that everyone in Hollywood read and liked but nobody would make: Too controversial. I think that means it’s in poor taste. Some people will be offended, but it is a story about the way we really are. Also, when I make fun, I make fun of everyone.

What is the name of your latest book and what inspired it?
I wanted to know how traditional belief systems are going to collide with technology, so I created a bunch of weird characters and as the story came to be, they told me. The book is called Visitor.

Do you have any unusual writing habits?
I get up before 5:00 AM ever day and work til noon. I’m told that is unusual.

What authors, or books have influenced you?
I admire the work of Yuval Noah Harari, Lisa Randall, and Nick Bostrom. I’ve read the Sci-Fi classics of Asimov, Heinlein, Vonnegut, Adams, and the others. I really liked Gail Honeyman’s Eleanor Oliphant is Completely Fine and learned much recently from Fiona Barton’s The Widow.

What are you working on now?
I’m rewriting my second practice novel, At Large, because I think it’s pretty damn good.

What is your best method or website when it comes to promoting your books?
Don’t know, only just got started in this. Ask me how to get a movie script made; that I know about.

Do you have any advice for new authors?
Never give up.
Also, when you can’t decide what to do, do them both and decide later.
Also, Never try to cut the hair out of your nose when you’ve had more than three beers.

What is the best advice you have ever heard?
“Use the time of a total stranger in such a way that he or she will not feel the time was wasted.”
Kurt Vonnegut

What are you reading now?
I just finished Rachel Maddow’s book Blowout. It’s brilliant. She will be known as one of the great political documentarians of the twentieth century.

What’s next for you as a writer?
I have to decide whether to make a sequel to Visitor, or would it be better to move on?

If you were going to be stranded on a desert island and allowed to take 3 or 4 books with you what books would you bring?
I never understood that question. How about this: 100 Ways To Prepare Palm Fronds, How to Build a Boat, and Learn to Sail In Three Easy Lessons. I’m not particularly sociable, but I can’t stand being away from people. I can blast through three books in a week or so. After that I’m itching to get back downtown. How big is this island, anyway? Big enough to need a credit card? Big enough to need pants?