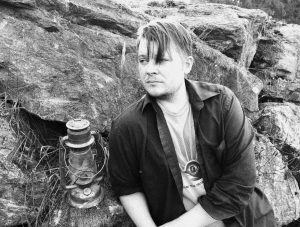 Tell us about yourself and how many books you have written.
I’ve been writing since childhood. It’s only until after high school, and then film school, that I realized I needed to give myself the permission to pursue writing seriously, with goals of making it my life.
I went to film school wanting to be the next Spielberg, then realized that was the entirely wrong motivation I’d been lying to myself about, and returned to my true love; writing.
I have 2 books and a short story out there and available. I have other manuscripts written in many stages, as well as short fiction and screenplays.

What is the name of your latest book and what inspired it?
Heart Of The Storm, the sequel to the first book Eye Of The Storm. The initial story idea came to me while pondering over the great spot on Jupiter, a massive storm that covers a section of the even more massive planet. I got to wondering what a massive storm like that would be like living in, and voila. I had a setting. The books’ aesthetics are heavily inspired by Mad Max as well.

Do you have any unusual writing habits?
Unusual? Not really. I just try to keep committing to a regular output schedule. It’s being on task that I have the most difficulties with.

What authors, or books have influenced you?
Richard Matheson. If I could sort of create a career template that matched someone’s existing career, it’d be his. His influence is present in most of my writing, what I call the Uncanny.

What are you working on now?
A dark fantasy western. It’s got curses, black magic, chaos, and things most foul. Gonna be great.

What is your best method or website when it comes to promoting your books?
I tend to do a scattershot approach to promotions. Promo lists like Awesome Gang definitely help, as well as the built-in Kindle promo tools when you are in Unlimited.

Do you have any advice for new authors?
There’s going to be hurdles around every corner. Every. Single. One. But getting past those hurdles will help you learn more of your craft and business, you will only get better with each step. Just keep going.

What is the best advice you have ever heard?
Read. No writer can be a writer without reading. I still think my best learning of style and substance has not been from a class or webinar, but from comparing what another writer did or didn’t do. READ.

What are you reading now?
An alien invasion series by Sean Platt & Johnny B Truant.
I’m also listening to the audiobook of The Hobbit because it’s narrated by Andy Serkis and that guy is just great.

What’s next for you as a writer?
More exploration into the uncanny frontiers of fiction I want to wander down. I have a horror universe in the gestation period, and that will need to be birthed sooner than later.

If you were going to be stranded on a desert island and allowed to take 3 or 4 books with you what books would you bring?
IT by Stephen King because it’s good, but also will last me a long time.
One of Richard Matheson’s short story collections.
Lord Of The Rings in a single volume (a bit of a cheat but so what)
Welcome Descent by Cam Wolfe because I promised to read it and haven’t yet.