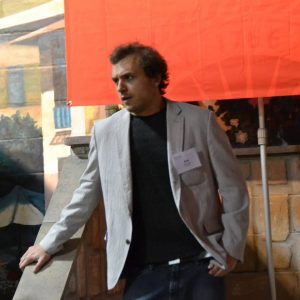 Tell us about yourself and how many books you have written.
I’m a PhD dropout, for starters. Was doing Jungian psychology and continental philosophy. Really love it–still do–but I could tell pure academia wasn’t for me. So I left to pursue my true dream, which was to be a writer. I still do independent scholarship, and for practical paying-the-bills purposes I co-own a furniture shop in southern NJ.

‘Icons One’ is my first published novel. It’s the first part in a five-part series.

What is the name of your latest book and what inspired it?
The name of the book is ‘The Icons of Man: Book One’. Suffice to say, it’s a lot of ideas that I’ve been brewing for a long, long time. It’s a pretty philosophical/speculative fiction kind of story, though it may not be very obvious from this first book, which is very action-packed and adventure heavy. But it deals with deep metaphysical themes about reality and life. Combine that with an alternate reality, an economy heavily dependent on a sports league where storm chases hunt soul-sucking thunderstorms, and you got yourself a pretty unusual story. I hope!

Do you have any unusual writing habits?
When I get writer’s block I write longform. Usually tends to break whatever logjam I have. Something about the flow of pen on paper forces your mind to make a decision. Word processors are great, all the options the computer gives you, I wouldn’t trade for anything. But sometimes sitting there and seeing the blinking cursor can paralyze you; it’s too much. Pen and paper you can’t go back, you can’t edit. You just gotta go. What’s great is whatever I write on paper, I then transcribe onto the computer, so you already have one layer of drafting done.

What authors, or books have influenced you?
Too many to mention really. Michael Chrichton was the first big name who I read a lot of when I was a kid, obviously due to Jurassic Park. In sixth grade our teacher read Harry Potter to us every afternoon, and I remember her telling us about J.K. Rowling’s success story, and it was around that time I thought, “man that’s what I want, I don’t know how but I’m going to get there.” Her style had a huge influence on me, maybe more than anyone. As I got older I read loads of Iain M. Banks, George R.R. Martin, and guys like Zelazny and Herbert. The big epic writers were always who I was attracted to–if not them, then people who deal with big concepts, like Chrichton.

What are you working on now?
Icons Two and Three. I want them out as soon as possible. While each novel ideally holds on its own, this is one arching story, and I want to do that justice.

What is your best method or website when it comes to promoting your books?
Still figuring it out! But all I can say is making contact with other authors and readers, showing genuine interest in what other people are doing, seems to make the biggest difference of all. Social media is great cause we can spew our thoughts all over the place, but I don’t know if it’s really all that great for promoting. No one who doesn’t know you doesn’t want to hear about your pet project. It becomes an echo chamber. What seems to work is an older style of internet–the message board community, where people talk shop and show off their craft. I think that’s the way to go for the indie writer.

Do you have any advice for new authors?
Have an idea or theme you’re really in love with, or else it’s gonna be difficult to stick by your story through all the blood, sweat and tears it will take to write it, get it published, and then promote it. You need to be in love with your work, and know exactly why you set about sharing it with the world, or else you’ll either lose faith too soon or be be false in your own confidence. Your story has to be YOU on a core, fundamental level.

What is the best advice you have ever heard?
If it requires a uniform, it’s a worthless endeavor. –George Carlin

What are you reading now?
In fiction, Throne of Glass by Sarah J. Maas. In non-fiction, When Pride Still Mattered: A Life of Vince Lombardi by David Maraniss.

What’s next for you as a writer?
Gaining ground on the next book and on promoting the first. Inch by inch, day by day.

If you were going to be stranded on a desert island and allowed to take 3 or 4 books with you what books would you bring?
Beyond Good and Evil by Nietzsche
Spinoza: Practical Philosophy by Deleuze
Deathly Hallows by Rowling
Lost World by Chrichton