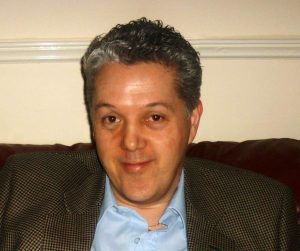 Tell us about yourself and how many books you have written.
I write with my brother, Garry. We are from the Elephant and Castle, south east London.

Our father (variously a pig farmer, cab driver, haulage contractor and general ducker and diver) and mother (homemaker, cook and doctor’s receptionist with a well timed left hook) raised us and our siblings with some old fashioned south London working class values. These included hard work, respect for their elders and a willingness to duck and dive when required.

We have endeavoured, with varying degrees of success, to maintain the values our parents tried to instil in us. One day, whilst enjoying a beer or two, we decided to write a Crime Thriller Series. We awoke the next day and were surprised to discover that we meant it.

I live in Bromley, London, and once worked as a Service Delivery Manager for an International IT Consultancy. My brother lives in Krakow and is now, of all things, a sociology professor. Both career choices served as a source of confusion and humour to our parents, who were born and raised in the days before computers and sociology professors existed.

Although Harry ‘H’ Hawkins, the protagonist of the London Large novels, shares some of our old fashioned values, he is based upon neither Garry or I. We wouldn’t survive the first chapter of a Harry Hawkins novel.

What is the name of your latest book and what inspired it?
Our latest book is the third in our ‘London Large’ series, and is called Bloody Liberties. Our books are very much centered on our protagonist Harry Hawkins, or ‘H’. We were inspired to create him by our own need to see a character like him in action. He is a flawed, often drunk and occasionally unstable murder detective from south east London, with a brilliant but problematic career now mostly behind him. The Falklands War left him with PTSD, and his subsequent police career has exposed him to the depths of human depravity. But we see him as a heroic figure who will always choose to protect the innocent and punish evil. He fits, therefore, squarely into the tradition of self-determined and hard-bitten cops who tend to go off the reservation to get their idea of natural justice dispensed. We like this kind of character, about whom it is cathartic, fun and satisfying to write, and we know that many others do to.

Do you have any unusual writing habits?
No

What authors, or books have influenced you?
The Day of the Jackal, The French Connection, The Sweeney, The Conan books and Pride and Prejudice.

What are you working on now?
A collection of short stories – Sharp and Short – to be published in January.

Do you have any advice for new authors?
No – none at all. I’m not worthy.

What is the best advice you have ever heard?
Just sit and write – don’t wait for inspiration

What are you reading now?
Roger Scruton – The Soul of the World

What’s next for you as a writer?
Write more books

If you were going to be stranded on a desert island and allowed to take 3 or 4 books with you what books would you bring?
Animal Farm – to continually remind me of the fallacy of communism. If, on the island, I were lucky enough to meet my Eve I would ensure a capitalist society, given that it is the only form of government to ever truly raise people from poverty.
The Bible – I’m an atheist but it’s the cornerstone of all western culture and civilisation and has an infinite variety of life lessons.
A Jack Reacher novel to remind me not to take any shit from the wildlife
The Rainbow by DH Lawrence – It would remind me of when England was a better place and allow me to bask in nostalgia.