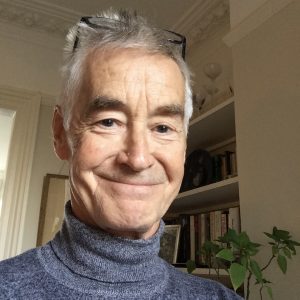 Tell us about yourself and how many books you have written.
I’ve been an actor for decades, in film, TV and the theatre (my screen c.v. is listed under my name on IMDB.com). I started writing seriously, about ten years ago, when my agent’s calls became less frequent. I wish I’d started earlier. So, to date, there’s a so-so novel, Walking Backwards, languishing in a bottom drawer (best thing about it is the title). Several screenplays – one about my experiences working on a tobacco and maize farm in southern Africa in the mid Sixties; another, an adaptation of a superb novel by Isobel Colegate (more of her anon); another, Shooting Tutankhamun, based on what happened while on location for a US TV film on the discovery of the boy King’s tomb. Then comes a family memoir, Relative Times. This was prompted by a cousin who didn’t want our family’s stories to die with us. I’m proud of this well-received book and am happy to say it’s available on Amazon. Writing and acting aside, I’m a family man, happily married to Janie with three grown up kids who between them have produced five marvellous kids of their own.

What is the name of your latest book and what inspired it?
My novel The Crimson Pantomime took seven years to write. Of course there were big gaps along the way but even in those I was always thinking, thinking, thinking… The inspiration for the book came to me after auditioning a spectacularly talented candidate wanting to train at a top London drama school, who through reasons you will discover when reading the story, failed to gain a place. That real kid will never know what he started! But I’m grateful to him.

Do you have any unusual writing habits?
I’m an actor. I’ve been telling stories all my professional life. So I inhabit my own characters as much as possible. This means talking their talk aloud (or under my breath if in public); and reading aloud what I’ve written. It’s great – instead of playing just the one character, I get to play them all. It helps me to imagine an audience, even a small one will do.

What authors, or books have influenced you?
Isabel Colegate, the author of The Shooting Party (I was lucky enough to play a major character in the film version); and her Statues in a Garden, a novel I became obsessed with in the noughties and turned into a screenplay hoping the film might be made in time for the centenary of WW1. No such luck; and, among others, her recently re-issued novel, Orlando King. Isabel Colegate’s style is spare, elegant, true and ironic. In my opinion she is enormously undervalued. Of course to even try to emulate her is a cheek, but I’m allowed to claim her as an inspiration.

What are you working on now?
Next up is a novelisation of a Viennese play written in 1911 and updated by me, very specifically, to 1968. (In that year, as a drama student, I appeared in an English adaptation of this play). It made a profound impression me. After The Crimson Pantomime I wanted to embark on a simpler, more straightforward story. Again, no such luck. This one will tax more of my resources than any of my other projects.

What is your best method or website when it comes to promoting your books?
I wish I was more interested and therefore better at promoting and marketing my books. Perhaps I’d then get to sell more of them which of course is what every author wants. I’m only now getting going. David Morrison of PublishNation, my indie publisher, is marketing The Crimson Pantomime for me and I’ve managed to get a few of my celebrity friends – Ian McKellen, Miriam Margolyes – to read the book and say nice things about it. My website is still under construction and I guess Facebook will play a part.

Do you have any advice for new authors?
Just the usual – WRITE! It’s such easy advice to give and so difficult to do in practice. Especially for us independent authors with no commissions, no outside deadlines, no-one but ourselves to believe in what we do. I am part of a local writers group, here in SE London. We are an eclectic lot. There’s only one rule: there are no rules! We (never more than six of us at a time) rock up at someone’s house or paid community space every other Tuesday at 7.00pm. The first one up distributes printed copies of what she/he’s written (2000 words being an agreed maximum – but more if she/he wants) and reads it out to the group who make notes, or not. When she/he’s done a discussion ensues – lighthearted, generalised to begin with and then perhaps becoming more detailed and specific. The talented writers tend to get more flak than the ones who are tentative and not so sure. But it’s never a back-slapping session and sometimes we ‘go home bleeding’. Well, it hurts to be criticised – especially when you know the criticism is spot on. The group has made my book better than it would otherwise have been. No question. Of course, all that was before Covid 19 stymied everything.

What is the best advice you have ever heard?
Let me copy and paste this useful list from those who should know:
1. Write!
2. Don’t always murder your darlings. But do look on them with a very beady eye. Not every little twinge of satisfaction is suspect – but the ones that amount to a smug glee is to be watched out for! Diana Athill.
3. Description is hard. All description is an opinion about the world. Find a place to stand. Anne Enright.
4. It doesn’t matter how ‘real’ the story is or how ‘made up’. What matters is its necessity. Anne Enright.
5. The reader is a friend. Not an adversary or a spectator. Jonathan Franzen.
6. Write in the third person unless a really distinctive first-person voice offers itself irresistibly. Jonathan Franzen.
7. If nobody will put your play on – put it on yourself – David Hare.
8. If description is coloured by the viewpoint of the character who is doing the noticing, it becomes, in effect, part of character definition and part of the action. Hilary Mantel.
9. Read it out loud. Michael Morpurgo.
10. In the planning stages of a book don’t plan the ending. It has to be earned by all that goes before it. Rose Tremain.

What are you reading now?
I’ve just finished The Last September by Elizabeth Bowen.
And just started Martin Amis’s Inside Story.
and, because I like to read a factual book alongside a novel:
Other Minds – The Octopus and the Evolution of Intelligent Life by Peter Godfrey-Smith.

What’s next for you as a writer?
If there’s time, and at my age that’s a serious consideration, I’d like to write a play.

If you were going to be stranded on a desert island and allowed to take 3 or 4 books with you what books would you bring?
I’d take all twelve volumes of Proust’s In Search of Lost Time – and finally get to read them!