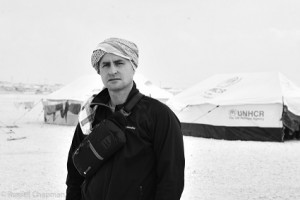 Tell us about yourself and how many books you have written.
I’m from the UK but am now based in Lugano, Switzerland. I’m predominantly a photographer but I also write about current affairs. In particular regarding the Middle East. I have one book, ‘Syria: Refugees and Rebels’ a photo documentary of my time in Syria as well as the refugee camps of Lebanon and Jordan. I’m well traveled and curious about everything. I’m intellectually curious but also mentally lazy. I can be a terrible procrastinator, leaving things to the last minute.

For me life is an adventure, not in the sense that every moment has to be full of excitement but rather it is about discovery. I really do believe in living in the moment, not in some hedonistic way but in the sense of appreciating each moment, to be happy in the moment. So many people say they will be happy when they reach a certain goal but they are so focused on that goal that they forget to be happy in the present. Life can be taken from us so easily. I have been in conflict zones, seen how one minute we are here and the next we can be gone. This is why I appreciate very much the now.

I started my passion with photography when I was 10, I think it was the fascination with being able to capture a moment in time. I got books from the library and taught myself the science behind the art and experimented with what I learnt. It was agony waiting for my pictures to come back from the lab. One of the things photography taught me was how to see light, the realization that when we look at something, we don’t see it directly but rather the light it reflects and is captured by our eyes.

As a writer, I really enjoy looking at things from a different perspective. I am well versed in the Middle East and write about events there but often from a different angle. So often the general media skims over situations or sometimes gets it plain wrong, so I like to try and give more in depth detail. The challenge is that as time goes by people seem to skim read more and more, attention spans are diminishing and most people are more interested in celebrity gossip than actual news. So I try to write in such a way that will get the information across before they lose focus. I think it is a challenge for most writers of serious subjects

What is the name of your latest book and what inspired it?
My latest book is ‘Syria Refugees and Rebels’ I was inspired to go to Syria last year because I have Syrian friends and they were all telling me that the situation on the ground is not how it is being reported in the news.

I wanted to photo document what I would see and experience. I was in Syria for a month. I then spent another month split between Lebanon and Jordan, visiting refugee camps and following the work of individuals who are trying to help the refugees. I don’t like calling them simply refugees, they are people like you and I but have been overtaken by circumstances beyond their control. They have the same hopes and desires as anybody, to have a home, a job, a family, to be able to live in security and with dignity. When we hear the word refugee nowadays we think of pathetic creatures, dirty, living in mud. So much so that they almost seem less than human. My book is about giving a voice to people who have lost so much but who are no different to you and I.

Do you have any unusual writing habits?
I can’t think of any, I have to be in the mood in order to write and I work much better in the morning. After a couple of hours writing I have had enough and go and do something else.

What authors, or books have influenced you?
Fahrenheit 451 by Ray Bradbury, Brave New World by Aldous Huxley and 1984 by George Orwell. I first read these books when I was a kid. I learnt to read when I was 4 and I was less than 10 when I first picked these books up. As time goes by it is interesting to see how those authors were well ahead of their time. The dystopias they created are becoming ever more a reality.

What are you working on now?
I’m working on publicizing my book ‘Syria: Refugees and Rebels’ sales of the book will fund my return to the refugee camps so I can continue telling their stories.

What is your best method or website when it comes to promoting your books?
Network, network, network. I also have a pretty strong platform with over 2000 followers of my blog: http://russellchapman.wordpress.com/ and more than 1200 followers of my Facebook page. I also speak at different events. The most recent was at Oxford University, there was an international conference called Refugee Voices and I was invited to show my work and talk about my experience at the closing session.

Do you have any advice for new authors?
Don’t give up if you really believe you have something to say

What is the best advice you have ever heard?
I know it is a bit of a cliche but always expect the unexpected. It has been proven true so many times

What are you reading now?
At the moment I’m reading about Charles Bronson a prisoner in England who has spent 28 years of the last 30 in solitary confinement. The way he tells his story is very powerful.

What’s next for you as a writer?
I am continuing my work writing about events in the Middle East as well as Russia. There is a lot happening in the world, there is always something to write about. At the moment I’m taking a bit of a break as I am focusing on selling my newly published book but normal writing will continue in the not too distant future

If you were going to be stranded on a desert island and allowed to take 3 or 4 books with you what books would you bring?
I would take the bible. Also a very good survival book, sometimes we need to refresh our memory. A book on the flora and fauna of the place I would be stranded, I would want to know more about my surrounding and what is good to eat. Maybe finally I would take the book Perfume, it is one of the most imaginatively intense books I have ever read.