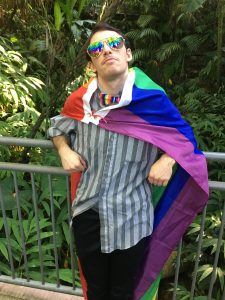 Tell us about yourself and how many books you have written.
I’m Ryder Phoenix, a trans/nonbinary author and artist (they/them pronouns). I’ve been writing and doing art my whole life. I’ve published many books, though the previous ones were under a different pen name. I decided to write with my real name, once I got the legal name change. My new series is Rainbow Reflections, with the first book being recently published. There will be anywhere from 5-7 books in the series.

What is the name of your latest book and what inspired it?
Rainbow Reflections Book 1: A Kind of Magic is my newest book. It was inspired by everything that I’m interested in and that makes me ME! I’ve always been into fantasy and wanted to attend a magic school when I was little. I’ve also been on a search for a transgender character that I could actually relate to; after finding none, I decided to write one in as the main character myself. The LGBTQ+-accepting world is also something I’d love to see, and the world itself is very abundant in plant life and rainforests due to my love of trees. There’s also elemental magic, as I’ve always been drawn to the four elements, and this magic is controlled by wands and martial arts (another hobby of mine)! The title, “A Kind of Magic”, was inspired by the band Queen, which is my favorite band.

What authors, or books have influenced you?
I always loved to read Harry Potter growing up, and though I don’t think I can enjoy the series any longer, I still appreciate the inspiration it gave to me. I also love Avatar: The Last Airbender and She-Ra (yes, I know they’re not books), which are a main source of inspiration for my newest story. Avatar inspires me like nothing else; it’s truly my favorite story ever. She-Ra made me realize that writing a LGBTQ+ world was possible, and allowed me to accept myself even more.

What are you working on now?
I’m working on Rainbow Reflections, a fantasy LGBTQ+ series. Zyn, Ren, and Sarala are about to start magic school–but will it be as they hoped for? After all, Zyn doesn’t have magic, Ren is collapsing to strange visions, and Sarala is haunted by her past. This series starts in a magic school, but will branch out to exploring a magical and LGBTQ+-accepting world. It will contain anywhere from 5-7 books.

Do you have any advice for new authors?
If you’re self-publishing, PLEASE get an editor (and a book cover designer). I’ve unfortunately read so many indie books that were terribly edited (if at all), or with wonky formatting because the author didn’t know what they were doing. I 100% understand that, as I’ve been there myself. My first books looked terrible, until I learned more about formatting, editing, and cover design, and was able to make the books worthy for publication. You can’t just write a book–you have to present it well too!

What is the best advice you have ever heard?
Write what YOU want to write, and your audience will find you.

What’s next for you as a writer?
I’m currently working on marketing my book, which has always been a weak spot of mine. I’m doing tons more promotions than I’ve ever done for my previous books. I also plan to start writing the second book of my series soon, once I get a bulk of the marketing done with (though I still plan on marketing at least ten minutes each day after).